Arg! So there's a ton of previews of upcoming figures all over the place and I've been saving pictures of them like mad and dreading how much I'm going to end up spending in the near future. I really have become addicted to figma. So first up on the list is of course, Miku Hatsune figma. I saw a preview picture of her at DannyChoo.com quite a while ago and I've been holding off getting all the other Miku figures that were released so far because that's the one I want the most. I am considering the nendoroid though. 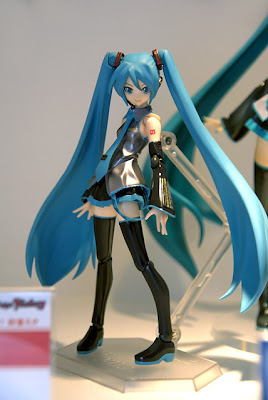 Of course, Miku is at the top of the wish list right now, but they're also releasing Rin & Len Kagamine, two other vocaloids. Rin looks really great in my opinion and I'm probably going to end up getting Len too just because of the keytar (and cuz I'm a sucker for figma). I used to mess around making electronic music, so the Vocaloid program really appeals to me. Maybe if I could get my hands on the program I'd start making music again... 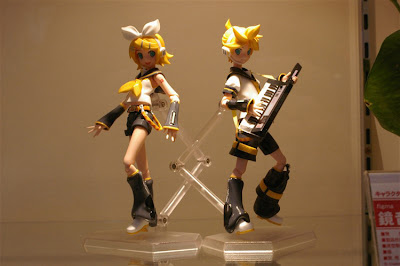 Since I've already ordered Nanoha and Fate figmas, it should come as no surprise that I'll be pre-ordering Hayate Yagami as well, from the Magical Girl Lyrical Nanoha StrikerS anime (first seen in A's). She looks amazing. I'm not going to get her just for the sake of completing the collection either, just look at her! Must get! 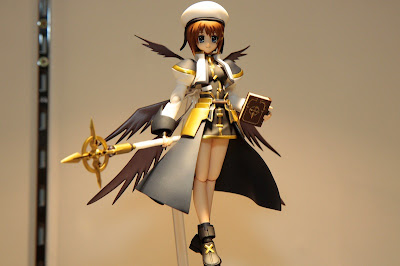 Alrighty, moving on. Next up is Ryoko Asakura from The Melancholy of Haruhi Suzumiya. This picture doesn't show but there was a picture from Megami magazine on DannyChoo.com a while back that showed she comes with a knife accessory. If you've seen the anime it makes sense. The scene between Yuki Nagato and her was one of my favorite in the whole series, so expect I'll be getting that and attempting to re-enact the scene as best I can. I really do have sucker written on my face don't I? 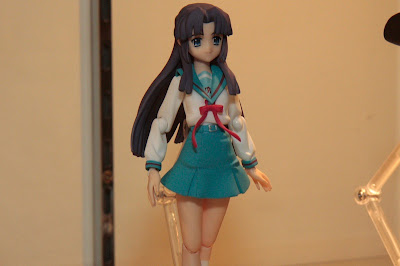 Now we have Tsuruya-san. She played a pretty minor role in The Melancholy of Haruhi Suzumiya, but she's a fan favorite. This is where I pretty much just straight up say I am a sucker, and my wife loves the anime and all the characters, so I'll most likely end up buying this one just because. 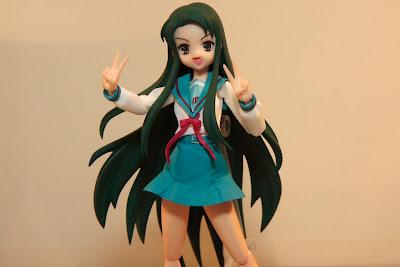 Alright, to finish up my new additions to my wish list we have Miyuki Takara from Lucky Star. All the other Lucky Star girls have either been released (Konata Izumi), or have been available for pre-order for some time now (Kagami & Tsukasa Hiiragi). I must say I'm looking forward to the OVA that's coming out soon. 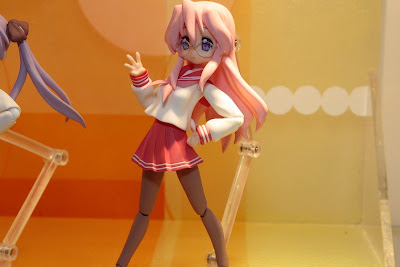 Oh yeah there's a LOT more figures that aren't figma that I really really love, but with this many to buy and me still being new to collecting, this will hurt my bank account enough! There were a bunch of other figmas but they didn't call out to me, at least not yet. I don't know anything about this figure yet, but it's Miku Hatsune, and it is freaking adorable! This will be going on my wish list too. Not all wishes come true though, so we'll see. 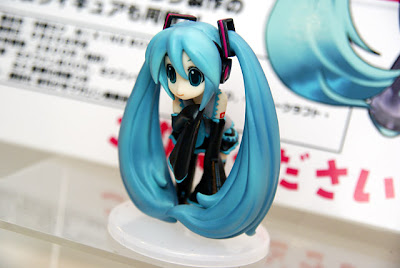 Of course, these are all just my newest additions to the list. There's a few others that I'm hoping to get that aren't really new news. Well that's all for this post, may your bank accounts drain slower than mine!
Posted by Persocom at 10:47 PM

I got my Figma Kona-chan! HEHE

YES! Hopefully I do not make anymore impulsive purchases! damn!

i just ordered figma konta from HLJ. forgot to do it during pre-order months ago. already pre-ordered Kagami and Tsukasa previously. can't wait for miyuki to complete the collection.

the Miku figma is so cute XD so are the others, but she sticks out for some reason. Anyway...bet that is really gonna kill the budget. Well worth it though.

anonymous coward - awesome! I can't wait till mine gets here, I really hope it arrives before my birthday.

gordon - I pre-ordered Kagami and Tsukasa before too.

otaku dan - I should be getting Nanoha any day here, can't wait. Miku is at the top of my list the minute they put her up for pre-order she's going on it. I'll probably try and get EMS shipping on her so she gets here ASAP after releasing too

kairu - yeah Miku sticks out, I wonder if she'll come with a leek or anything. I'm willing to hold off on buying anything else but figmas for a while, now if my wife doesn't persuade me otherwise... lol (she's eyeing up some more expensive figures)

i'm only getting my second figma later. I've already own the Saber and getting the Mikuru one.

Get get, then pics pics! Any that your wife wants? ^^

Wow, u are eying on all the figmas at this years wonfes.
I'm will ya buddy.

Every figma u mentioned is in my "GET" list and will preorder them when HLJ puts them up. ^^

The Miku figma's cool. So far, that's the only figma on my want list. I still think the GSC Miku that's coming out in a few months is better, but then again it's twice as expensive.

justin - I'll definitely get pix ^^ My wife is excited about the Miku, Miyuki and Hayate figmas.

optic - yup, I've become addicted to figma. They just keep bringing out characters that I actually like, it's hard to resist.

orange - the GSC Miku looks great too, and I thought about getting that one but the figma is more my style, I like being able to change up poses frequently.

Are you trying to collect all the figmas?