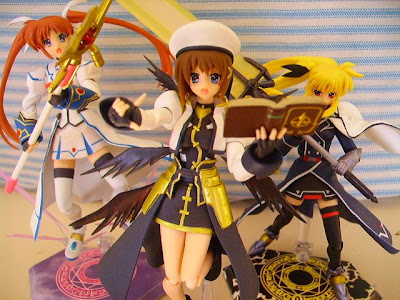 Since I recently finished collecting the Figma trio from Magical Girl Lyrical Nanoha StrikerS I decided to do a group shoot. The girls each have their own review: Nanoha Takamachi, Hayate Yagami and Fate T. Harlaown. So because they already have their own reviews I won't be doing much but just posting more pictures of them. 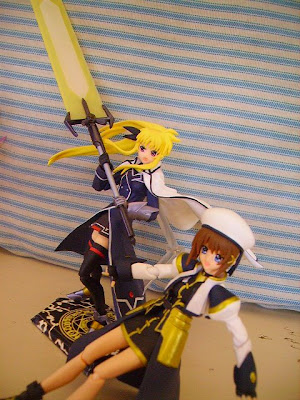 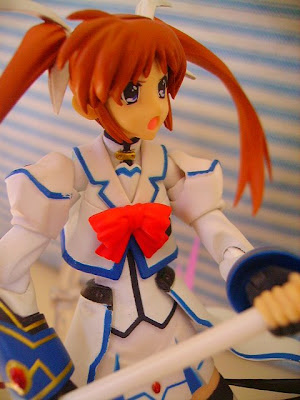 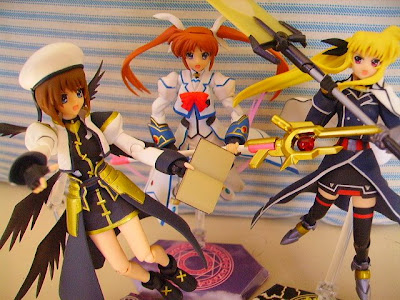 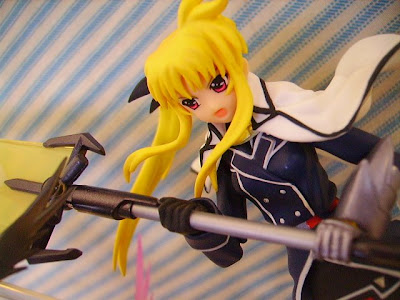 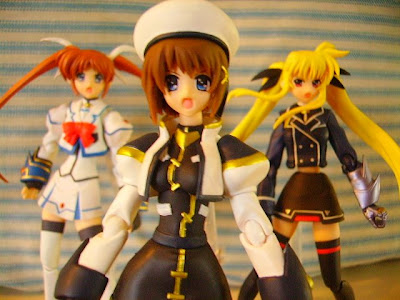 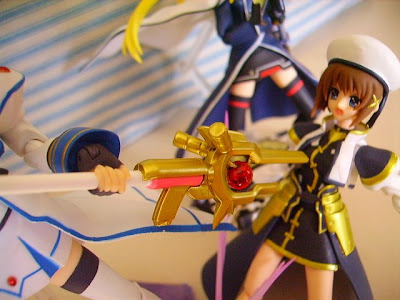 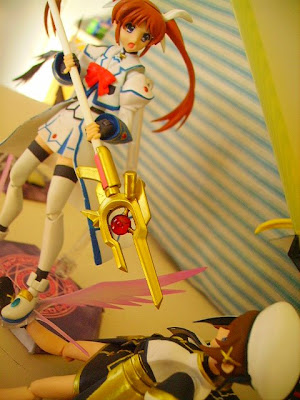 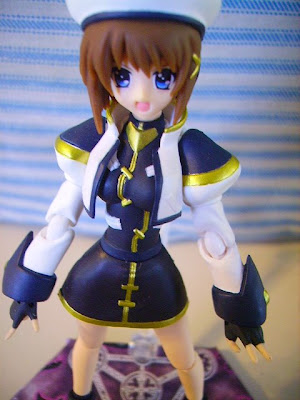 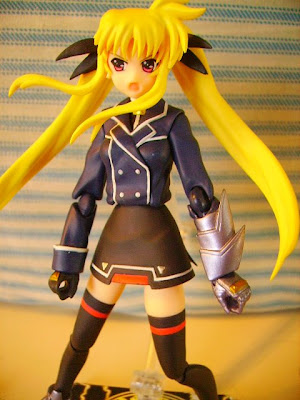 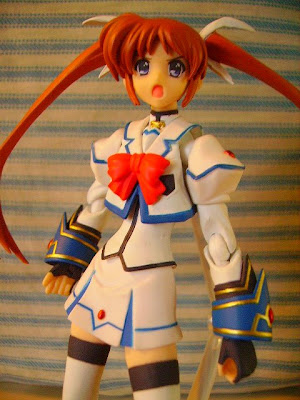 I can't really pick a favorite figure-wise, but my favorite girl from the Magical Girl Lyrical Nanoha series would be Fate. I still like Nanoha and Hayate quite a bit though. Always liked Nanoha's kick butt and make friends attitude, and Hayate's willpower and pure strength. It's a shame Hayate didn't get more air time really. 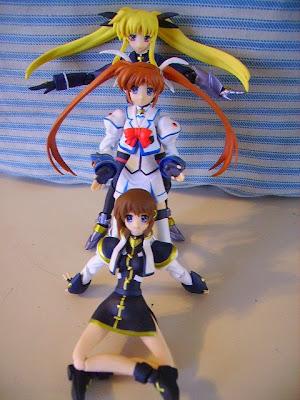 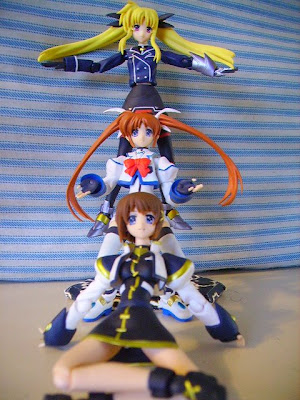 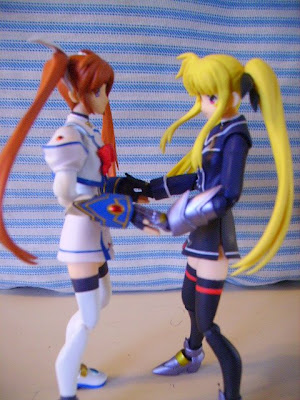 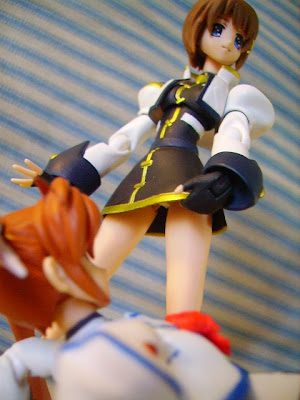 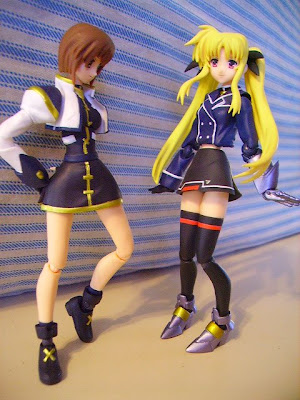 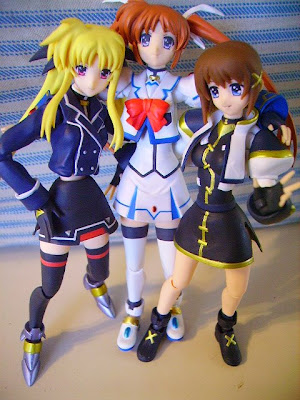 You'll notice I took the skirt parts of their barrier jackets off for a good number of these pictures. Nanoha's slides off sideways, Hayate's requires you seperate her torso, and Fate's does also but requires much more work getting it off, and even more safely getting it back on. I wouldn't really suggest messing with Fate's, I was quite afraid I'd end up breaking something, so don't complain to me if you do. Again I used the custom bases that I've been talking about in most of my Figma posts lately, in the few I used bases for at least. You know I didn't realize until now that I didn't bother with any head swapping pictures this time around. I kind of had a hard time with this shoot, between the camera and I'm running out of backgrounds to use and I couldn't find anything that suited them. Going to be fixing that problem soon. I would have done it outdoors but it was too windy and I didn't want to risk losing pieces. These three girls have a load of accessories when combined. 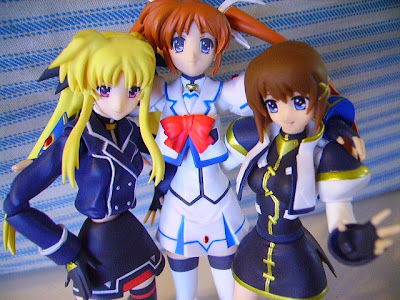 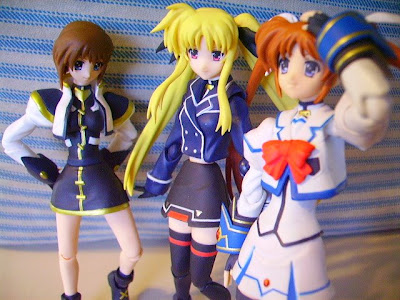 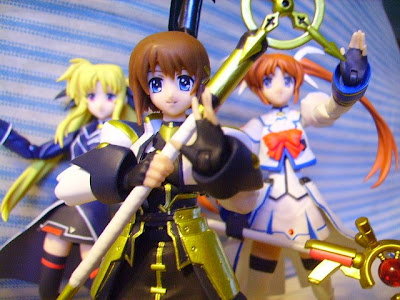 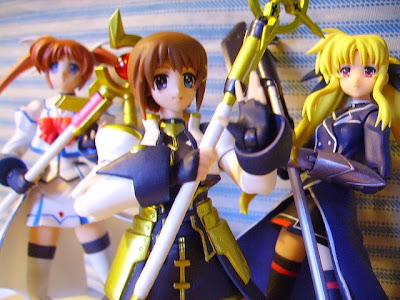 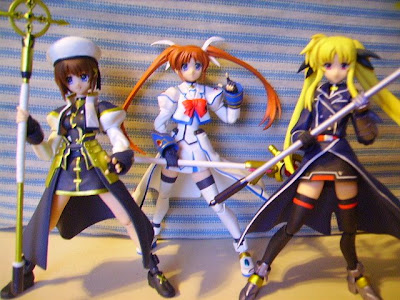 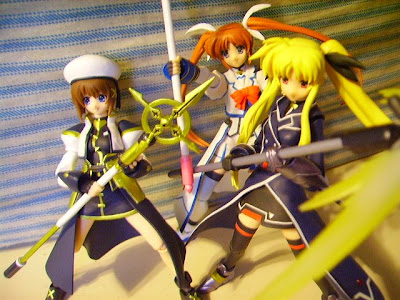 Not a lot to be said here besides they look good together and if you're a fan these are pretty nice figures. I wouldn't mind seeing more from the StikerS crew as Figma, especially Vita and Signum, but Teana and Subaru would be pretty cool too. I doubt we'll be seeing them anytime soon considering the length of time between Nanoha, Fate and Hayate's releases. Of course, we may never see them either, but it doesn't hurt to hope a little. Well, I should be getting a couple things in the mail soon, also have an anniversary coming up later this month. I'll be talking about that soon enough. Hope you enjoyed the pictures. Now I feel like playing Magical Battle Arena.
Posted by Persocom at 9:21 PM

My god they look kickass together...perhaps I should hunt down those two other figures now!

Fate without a jacket looks kinda weird. I like Hayate. For some reason she's my favorite, probably because she's the most powerful to me

Am waiting for the stores to have stocks on her figma

Fate will definitely be my favourite, be it her appearance or her weapons. She shows an air of elegance, yet has the colours to show people her power.

They look very epic when standing together!

How come Nanoha is looking up Hayata's skirt in one of the photos XD...

My favorite is Nanoha, but I like Fate as well.
Im agree with you about the few time Hayate had.

Looks good looks good~
But maybe find a way to use a background that is also a 'floor'? Like a long roll of paper/material.
You'll look super professional.

lol. Somehow, when I looked at the background, the first thought that came to me was "Pantsu!" ^^; Too much Strike Witches for me, I think.

Mm~ Would LOVE for a Signum figma.

Awesome group shoot. I'm planning to do a group shoot of them as a general review as I can't really be bothered in doing separate reviews for each due to a lack of time and patience.

I wouldn't mind seeing a Signum figma. She would be epic. ^^