First off I'd like everyone to know that despite a long delay, Animatic Figmation the actual site is well under way. It's up and running right now but I need to do some work on it because of the theme I'm using. I might have one or two more posts here before I completely migrate over to the new site. So everyone prepare for the move. I know I said I was doing it soon a while back but so many little things have delayed me. I'm very eager to finish the final steps before the move. I'm going to be spending the weekend testing things out and messing with it, and hopefully early next week I'll have it all ready to go. I'll do one last post here before the big move and go to everyone's blogs to let them know since I doubt half of the people on my blogroll will even see the post. 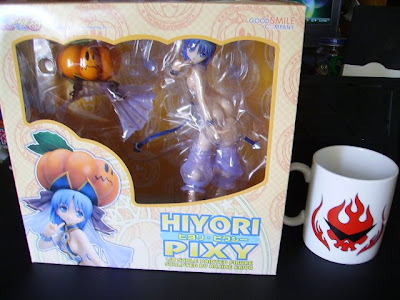 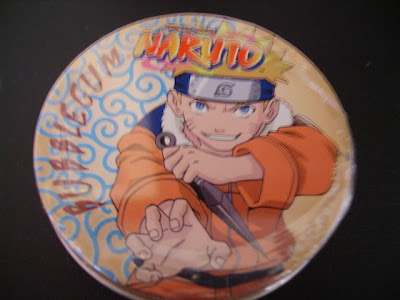 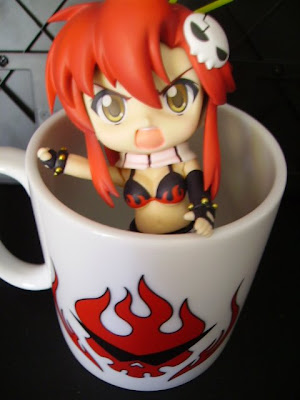 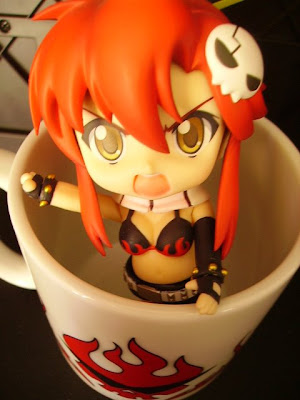 On another note, yesterday I received my first package from OtakuFuel. I wanted to try them at least once. I had ordered Clannad DVD Box Set Season 1 Complete Collection, Pixy Hiyori 1/8 PVC and a Gurren Lagann mug. Well, I got Pixy and the mug, but they said Clannad was on backorder, but I still got the free shipping from spending enough, since they kept the money for Clannad. Hopefully it doesn't take too long for the backorder to go through, but I guess these things happen. I can't really form an overall opinion of OtakuFuel until I see how they handle that. The only thing I can say I really don't like is their shipping method, Fed Ex. The package arrived early morning on the 19th, and sat in the Fed Ex warehouse or whatever until the 20th. Around 10 AM the Fed Ex truck drove two houses past our house, stopped for a few seconds and then did a U-turn without even looking at our place. Then they drove up the road behind us and did the same thing, drove back past our place and went down the opposite road, did a 360 in front of the mailboxes and took off. They were obviously lost, and lost with my package. I did manage to get my package yesterday though, about 5 hours after they got lost. I was pretty upset that they didn't even look at our house number. Fed Ex is not my favorite shipment method that's for sure. Anyways, I got a free gift with my purchase since it was over $20... nope, not a Nendoroid Petit like I've seen many people get, I got Naruto Bubblegum! Oh well, I'm not complaining, I'm just jealous of the people that got better stuff. I don't even read/watch/associate myself with anything Naruto related so whatever. It's free so there's nothing I can complain about. I really do like the packaging that OtakuFuel used though, Pixy was in her box, inside a box, inside the main box, surrounded by air bags and peanuts, and the mug was inside plastic, inside it's own box next to the Pixy box inside the main box. Phew, that was a long sentence. Technically the order was in Riiana's name because I still haven't received my replacement card after my little incident. The bank screwed up and didn't get my address right so I had to cancel the replacement and send for another one. I think since she's a bit ecchi, Pixy Hiyori will be the first figure review of the new site! 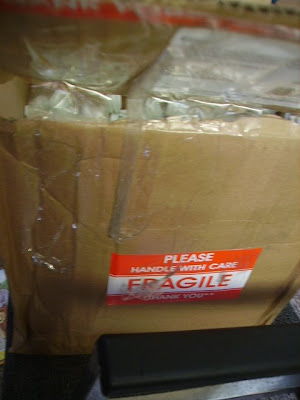 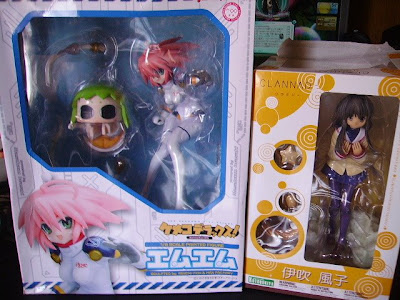 Well, I was about to end my post when a new shipment arrived from Robert's Anime Corner Store. I've got to say this time I have something to complain about. The mailman delivered my package and it was all dented in despite the Fragile warnings all over the box. For the first time ever I can say I'm disappointed in the way my packages arrived (ok, aside from my very first figure get). I got Emu Emu 1/8 PVC by Max Factory, and Fuko Ibuki 1/8 PVC by Kotobukiya. Both figure boxes are damaged, and Fuko's to the point where I don't have to open her package because it's already opened for me. Since I'm unhappy with this I'm going to take pictures of the boxes before I even open them. 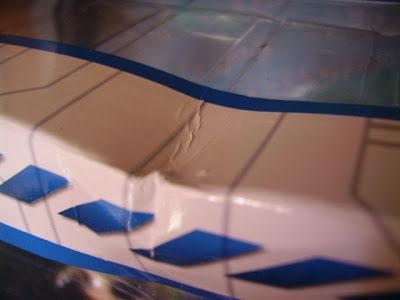 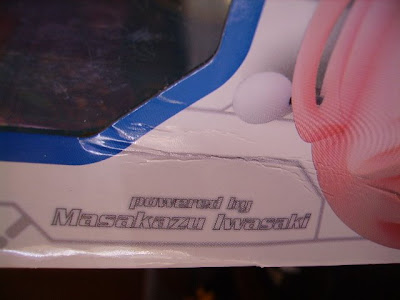 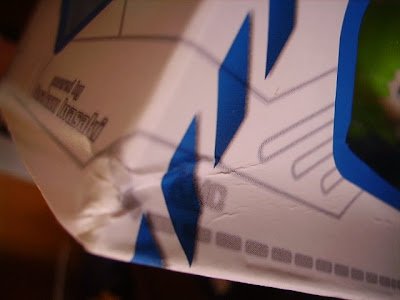 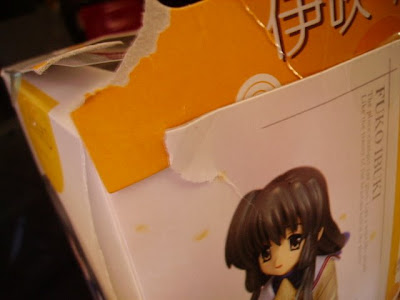 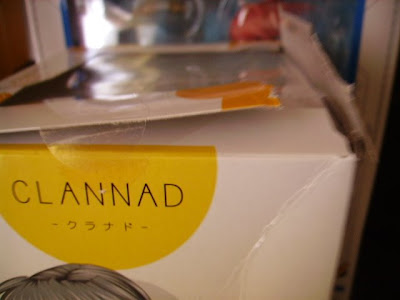 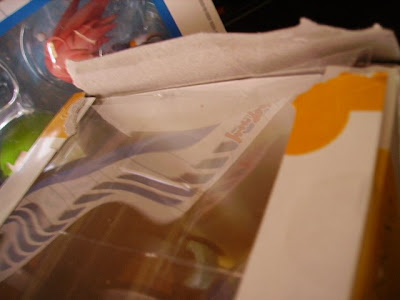 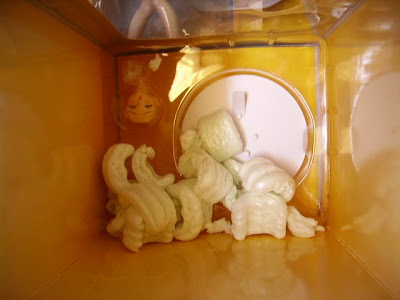 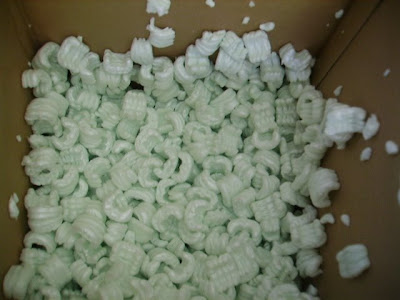 Styrofoam is evil. It was even on the inside of Fuko's box as you can see from the pictures. Well, I know I shouldn't make a fuss over boxes unless the figures inside were damaged, but it's quite annoying anyways. I'm one of those people who likes to keep my boxes and keep them in decent condition in case I need to store my figures or move them. Emu Emu's box wasn't damaged too badly, but Fuko's practically fell apart. The only thing holding the box tab on was a piece of tape. Isn't it wonderful how responsible mail carriers can be sometimes (sarcasm intended)? Alright then I won't complain further, the figures are in good condition and that's all that really counts in the end I suppose. They're happy to be free from the tyranny of bad mail carriers, just look at how happy they look to be in my home! 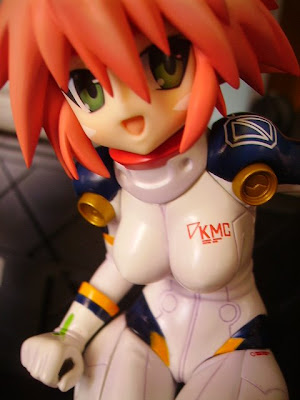 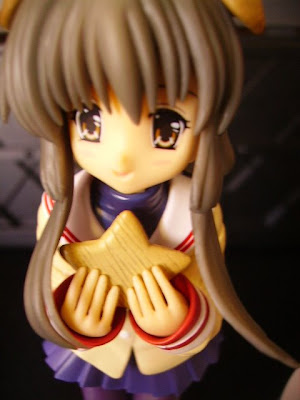 There, now I can end this longer than expected post. Reviews will be coming soon!
Posted by Persocom at 9:39 AM

Dont rush the release of your site.Better take some more days and deliver a solid one instead of hurrying up and havinga buggy one.

Woah! Did the mail man play soccer with it?Thats some serious damage!
Ive been lucky so far with my figure boxes

Blowfish~ You're right, I just got home from work and saw everything, that is some crazy damage to those boxes, WOW. I hate mail carriers, fedex, and UPS... but EMS I have no complaints yet.:) I'm just really glad the figures were all okay when they got here.I now have Fuko watching over me while I type.:D ~~HAPPY GRIN!!:D~~
Emu Emu also looks awesome, but we need to get Nendo Kemeko before we do a whole lot with her. And I now have My Gurren Lagann mug, so I am really really happy!:D

OH yeah~~ AND I ALMOST FORGOT, Super duper happy to have Pixie Hyori in my home!:D She is absolutely beautiful.:D

And like Blowfish said, take your time to get your site up. Coding and formatting can be such a pain.

Yeah, I like to keep the boxes so I don't like them getting damaged, even though the figures are totally fine. Once, I got really angry when the airport workers mishandled by box of figures worth SGD1000, and my Suzaku figma box got dents in the corner.

Anyway, are you moving to wordpress, or your own domain?

That Gurren Cup! I must have one so that I can drink from it while wearing my Gurren shirt!

Blowfish - I'm sure customer service is getting tired of me by now XD Yeah, the strange thing is the only time I've gotten serious box damage is when it's got Fragile: Handle with care stickers all over it...

Panther - yup, I'm trying to take my time but hurry at the same time, been working on it every day since it went up, bugging customer support whenever something goes wrong XD

konadora - I expect what I pay for to be in good condition unless it's been previously owned, I really hate seeing boxes beaten up and worrying about the figures inside. It's my own domain, but it's setup with wordpress.org

Snark - Riiana hasn't let me use it yet, I'll have to sneak attack while she's at work lol. I want a Gurren shirt~!

Nice haul you have over there... surprisingly most of the figures that I own is in your buy list. I am hunting for Fuuko as well =_=" Koto didn't went over to reissue it :(, along with Nagisa. Two more Clannad for a full Kotobukiya Clannad collection.

Wow, one bad delivery service, and one with really bad damaged boxes. Surely sounds disappointing to know that ._.

Take your time on the posting and the new site; despite the delays there you've posted more often than me already lol.

haruji - I'd love to get my hands on the Nagisa figure too. Hope you can find Fuko ^^

Q - I'd like to hope I never see worse box damage, but something tells me it'll happen some day.

I can understand how you felt. Are you certain is the mail man fault?