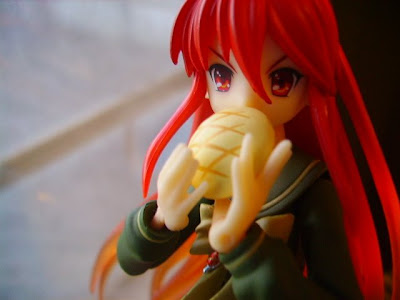 Shana, the Flame-Haired Burning-Eyed Hunter, or Flame Haze, has arrived in fiery Figma form. She hails from the anime Shakugan no Shana, though this particular figure is from Shakugan no Shana II. I bought her from Hobby Search, as usual, and she cost 2,261 Yen, sans shipping cost. She is still in stock at the time of writing this. 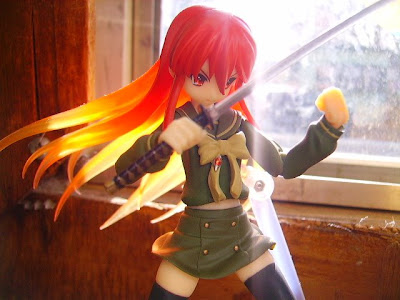 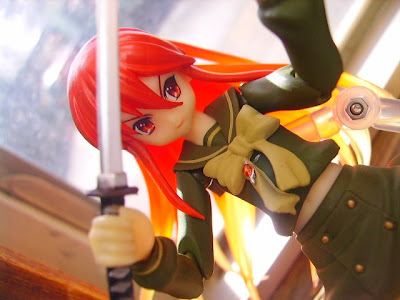 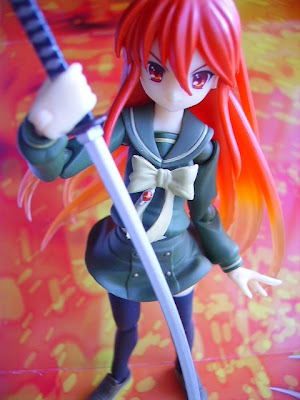 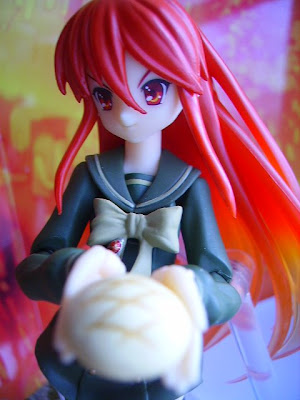 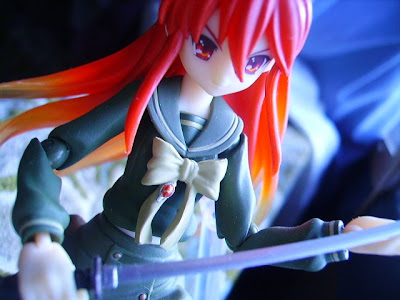 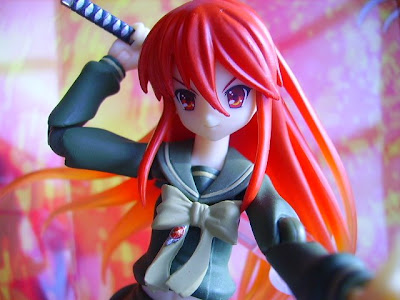 Shana comes with a total of 2 faces, 12 hands, 1 melon pan, and one katana (her Nietono no Shana). Alastor, her pendant, is attached to the bow of her school uniform. This I don't especially care for, because I think it would have done better as an actual pendant, but it's probably better this way because it's not as easy to lose or break. Her katana is thin, so when handling it one needs to take extra care so as to not break it. The stand that comes with Shana is a bit different than most of them, because her hair is longer. It comes with an extra piece (as shown in the last picture) that attached to it, and goes into her back so the stand sits sideways. This restricts her movement a bit, but not too much. The most unique thing I find about Shana is her hair. It has two pieces that move in and out to create a flaring out or wind blowing effect (see below for example pictures). 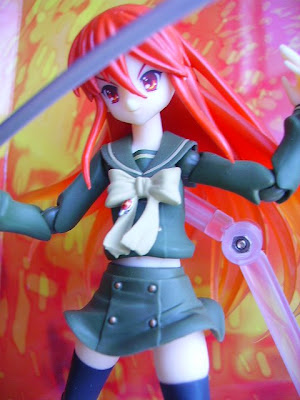 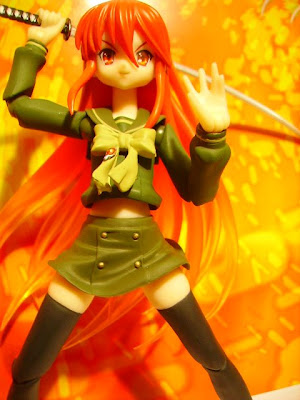 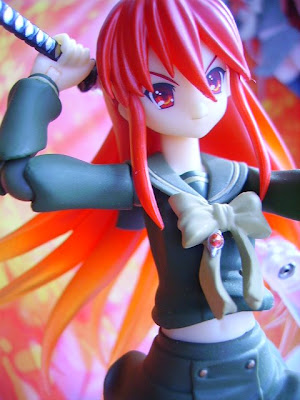 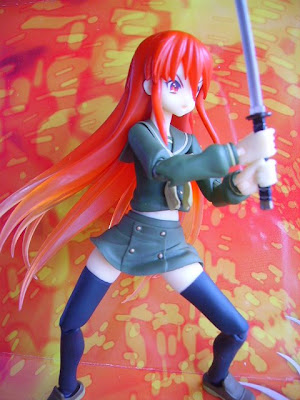 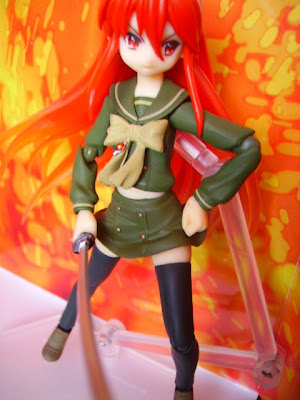 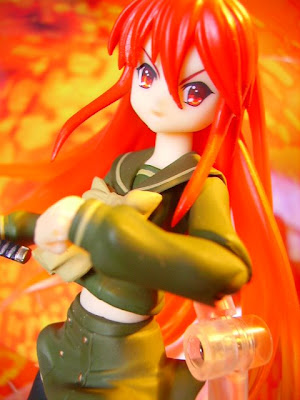 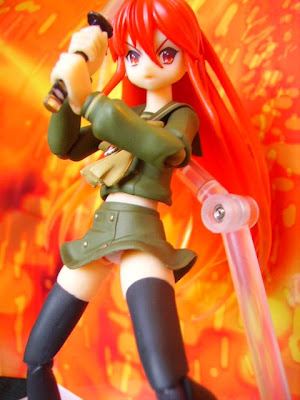 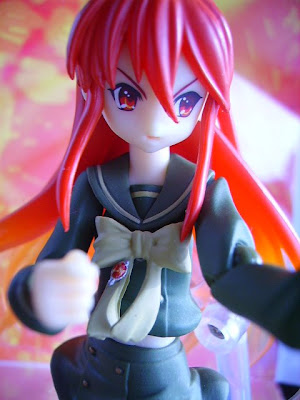 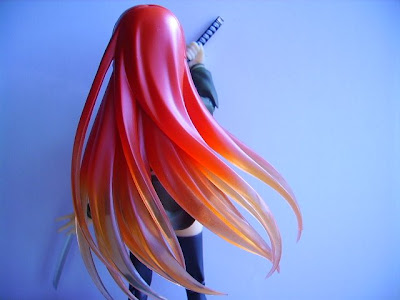 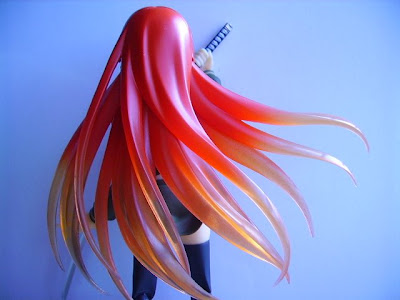 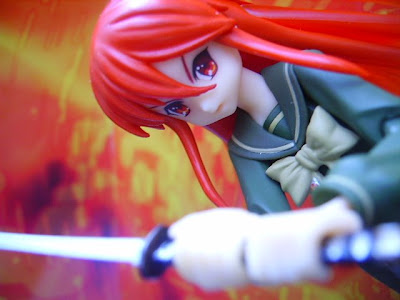 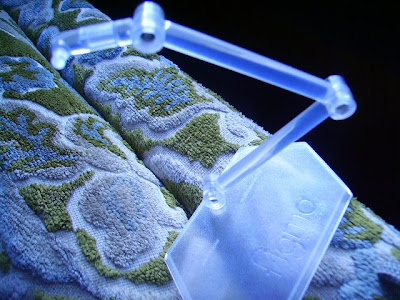 This has nothing to do with the review, but I bought cheap transportation and decided to test it out with Shana. It's the first vehicle I've been able to find that a Figma fits in pretty decently, so I thought I'd throw in a bonus picture or two. I'll be buying a few more of these for a future shoot. 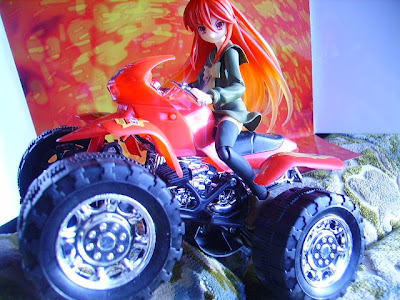 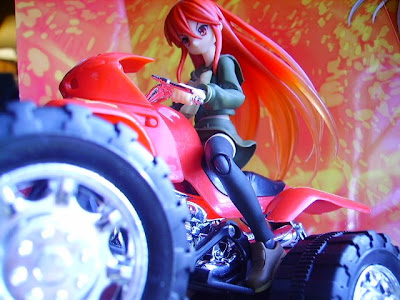 Nice pictures!
I love her on her hot ride^^

Great shots. I love the hair, especially that they made it translucent <3

Hmm, after going through your review, i will have to think again if i should skip this figma. Will have to wait for supplies from my local retailer to arrive.

Haha! I love it how you put her on that vehicle! She fits so well, it's like the car was made for her.

I canceled my preorder because i found out that there is something that is not right in this figure for me... Hmm... Maybe I'll reconsider to buy it if there's any donation... =D lol

i've found i really love accessories for figmas and nendoroids. gives you that many more possibilities for reviews. good call on the vehicle ^_^

interesting bit about the hair... had no idea they made it moveable.

I think she looks better with black hair but it is still a good figure. nice pictures by the way

I have to agree Figma Shana was a lovely buy!:D

i think the frowning face suits her better.

Otaku Dan: My wife also prefers black hair Shana, we're going to try and get ahold of her when she comes out.

Glad everyone liked the pictures of her with her new ride ^^ I'll keep that in mind for future posts, and when I'm in the store.

Nice poses! I lol'ed how she fits so well on the ATV~

she looks a lot better in person, at first i wasn't too hot on this figure ...

the only thing thats missing is the ahoge >_>

I really like the body too, I now use it for Fate's head at the moment :P