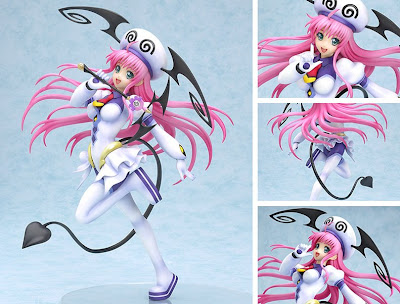 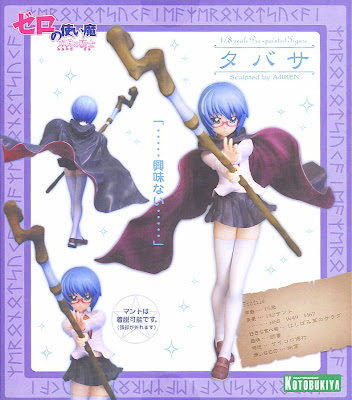 Alright, I just did what I thought I'd hold off on for a while. I went and ordered a couple PVC figures because I'm afraid if I don't do it now, they won't be available much longer. Today's order consists of Lala Satalin Deviluke (GoodSmile company version) from ToLove-Ru and Tabitha (by Koyobukiya) from Zero No Tsukaima. Not to mention the fact that I have Rin and Len Kagamine figmas, Tsuruya figma and Yoko Ritona Revoltech all coming next month. Lala was hard enough to find, and Tabitha seems a little easier to come by. One figure that I'm craving had to be put on hold though, Enma Ai by Alter. I'm currently trying to finish watching the 2nd season of Jigoku Shoujo to prepare for the 3rd which should be airing next month. If I miss this figure though I have a feeling there's a high chance of a new figure coming out to coincide with the new season, and from demands, if they're met, she'll be the perfect version that everyone wants so badly, her in the kimono she wears when delivering revenge. I have to get a figure of her eventually... it's a must. So ToLove-Ru is nearing it's end and this figure is already getting hard to find so I decided to jump on it before I regret it. I was worried it might be a leaner but I've seen numerous review on it and I guess her lower half is made of ABS so hopefully no worries. So that's all for now, it might not seem like much but we (my wife and I) are starting to get a little carried away with the speed which we buy figures. I didn't really start collecting figures until this year, and I'm already trying to figure out where I'll put them when I run out of space on my computer area. Keep in mind I have a four year old son, so I gotta keep them out of his reach too. One of these days I'll show where I have them now. I'm also getting a lot of boxes stacking up, I just don't like getting rid of them. I guess that's all for now, look forward to more pictures soon!
Posted by Persocom at 7:09 PM

I am watching the second season of Jigoku Shoujo as well; and I didn't know the 3rd season is next month. I got to finish it by then. I want a kimono version of Enma Ai too, I prefer the one she wears in first season.

Welcome to the dark side of figure collecting. At least you have a good restrain on yourself...I have 12 more preorders lolwit. Death to me.

Ahh yes, the nightmare of impulsive purchases. This month has been bad to me. VERY bad.

LOL I went and haul ALOT of old stuff. The whole commercially release nendoroid from Suzumiya Haruhi (about 4 of them I belief), Nendo Primula, Shalon, Aloe, Taiga, WF Mellissa (next week).

I got to learn some self control before I exhaust some of my savings.

ahh..yeah i know that feeling that youll never get your hands on that figure if you dont order her right now.The next few months are quite expensive for me

I had to cancel lala which was a shame as my budget was stretched this month. She's still on my 'Get List' but I will see considering I'm not close to finishing the series.

I know hun, i'm bad... I admit I am impulsive when it comes to spending, but dangit, I want these before they sell out!:D
I hope you know Danny is like my mentor when it comes to figma, figures and everything Japanese!:P
Love you!:D

Ah, you've gotta hate this time.. when ordering is a must and wallet's are in despair ;_;

figure collecting is my anti-drug

u ordered Tabitha? such coincidence, i ordered siesta from the same series yesterday. ^^;

You and your wife collect them together? I think thats so cute. For a LaLa figure I went for the Alpha Omega one but reviews on the GSC one seem a lot more positive so far, so it has me hesitant about if I should go back and snatch the other one as well.