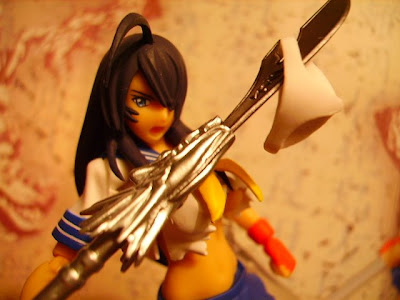 Here we have Kanu Unchou figma from Ikkitousen: Great Guardians. Now, mind you, I haven't watched the anime yet, as it is the 3rd season of Ikkitousen, and I've only about 2/3rds of the first season. I've seen enough to think Kanu is pretty bad ass, although I really don't care for the anime much. This figure was I bought more for the fact that this is the first "cast-off" style figma, and the first figure that I'll have owned that was actually ecchi in the least. My wife thought she looked pretty cool also. So this is probably the first figure that I've bought where I really didn't care for the anime much and don't know the character all that much either, but there are so many figures of her out there, and I'm an avid figma collector it would seem. 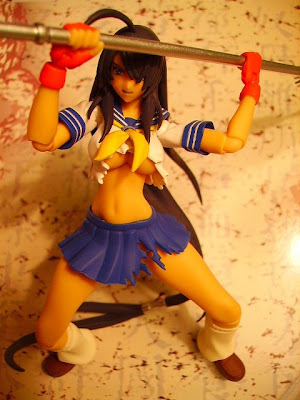 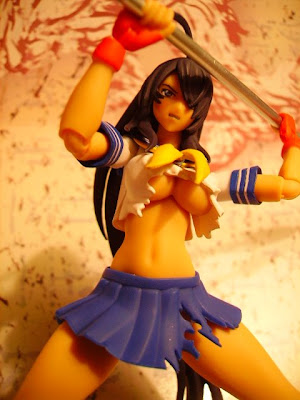 Now, you may have heard people's reviews about Kan'u being a bit smaller than other figma. Well she stands about the same height as Tsukasa, but her upper body really is smaller than the other figmas. Her face is the smallest of all the figma I've seen. She does have thick legs and bulky knee socks that help her balance easier, but the socks do restrict some of her feet's ability to move. Her hair is pretty awesome, and it can also support her weight along with her feet for posing without the stand. The stand itself has a different sort of attachable piece that I've shown here, to allow her to be on the stand without her hair getting in the way as much, but the piece seemed a little too loose for comfort, she's alright on it but I might try and secure it a little more just to be cautious. Another interesting thing about her hair is that the longer piece is actually removable, and it has a figma joint in it. She comes with 3 faces total, open mouth, normal and what has been come to be known as the constipated look, lol. 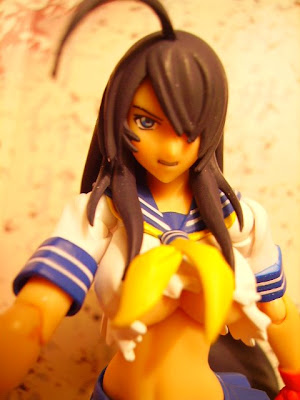 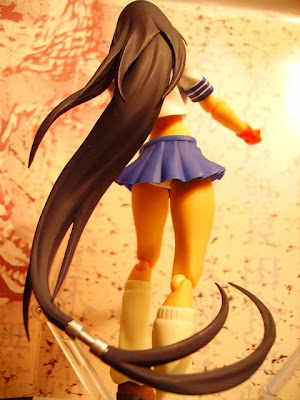 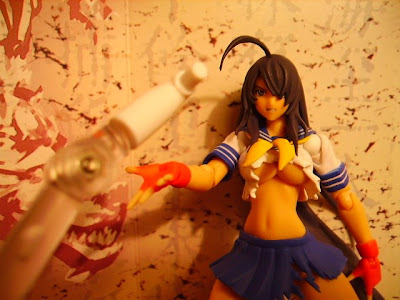 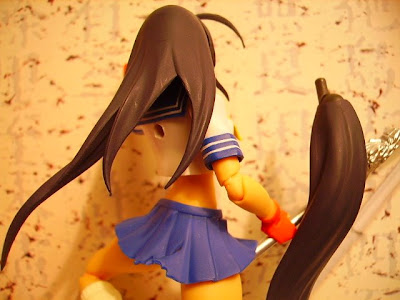 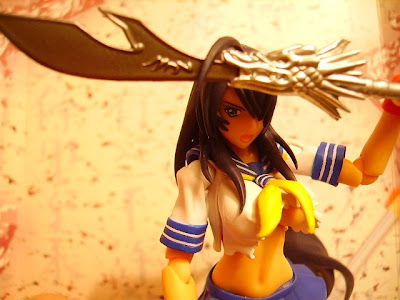 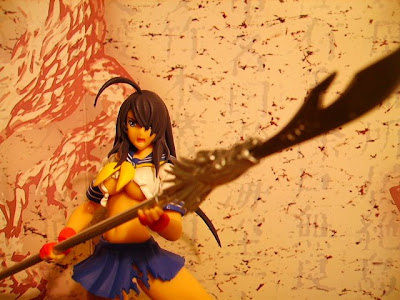 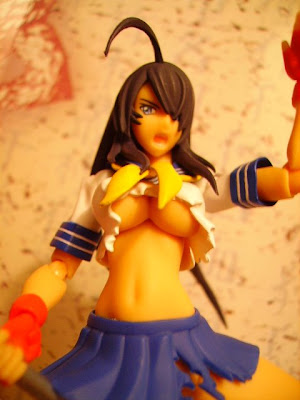 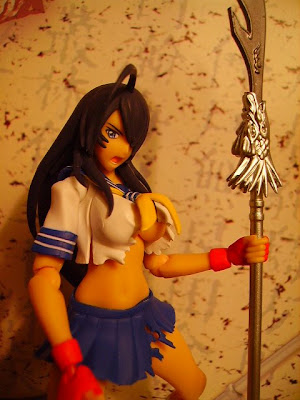 As for the cast-off side of things, well I'm not so sure you could call it cast-off but that's what I'll call it anyway. Her shirt/breasts are removable and replaceable with the ripped battle version, and removal and replacement was pretty simple, just a little pushing on her "eyes" and they slide into place, you can notice a bit of a crack where it comes off, but I don't think it's that bad. As you saw in the very first picture in the post, her pantsu is removable, but not exactly how you think. In order to change her skirt you need to remove both legs, then remove the pantsu, then pull the skirt off and put the other one on. I had a bit of difficulty putting the other skirt on her, and what I ended up doing was turning it inside-out (it's a soft rubbery plastic) and slipping it over her waist, then turning it back the right way and slipping it into the waistline crack where it's supposed to fit into and stay in place. A bit of a task, and somewhat scary at first, but all in all it turned out just fine. Yes, the first shot you see she is actually without her legs, I got the idea when I was changing her skirt. I just realize that this post sounds really, really bad. Well, hope you enjoy the pictures! 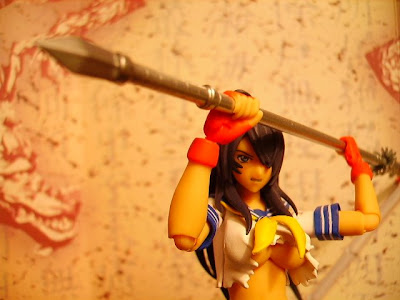 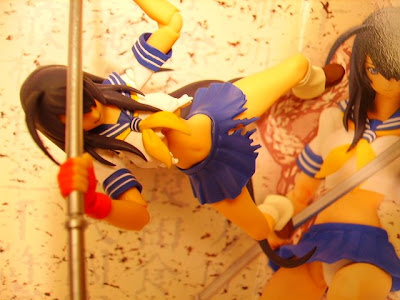 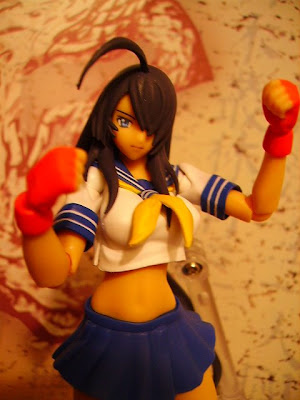 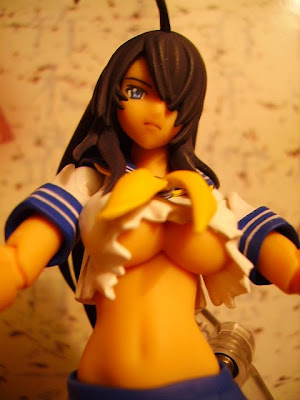 the detail of her blade is pretty nice.

I dont really like Kanu but since shes Ikki Tousen Merchandise and Ryomou follows later i had to get her.

Cant wait to reenact the fight on the schoolbuilding :D

No she's not really completely castoff. The pantsu is a soft rubbery section all it's own, so when you remove the panstu you're left with joints underneath that the two legs connect to, sorry if I didn't quite make it clear enough. If such a thing was the case I would have been sure to include pictures so nobody would miss out on what's underneath. I could always add another picture of he lower body without the pantsu attached to serve as a self-explanation if you'd like

after reading your post, i release all figma has removable pantsu. i didn't knew about it before. ^^;

sorry for the typo. i meant realise not release. my bad. ^^;

omg you can take off the pantsu!? thanks for the info :D

Now I really want to get her.
I might be able to squeeze her into my budget.
Like the shoot. ^^d

I was really tempted by her just because she is a figma that has a weapon and long lovely hair...but I really dislike Kanu's school outfit. I don't know why I just hate it. I know many love it though...

figmas with weapons I (personally) plan on owning so far!