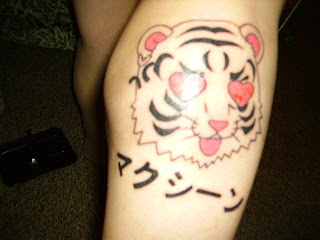 SO... I have finally gotten my second tattoo!:D This is the one that all otaku's that know me have been waiting for... Tama Tiger inspired from a dream as well as the anime Hayate no Gotoku ...
I had originally planned on putting it on my ankle but it ended up on my calf because of the size. The dream that the idea for the tattoo originally came from was one I had shortly after the death of my mom (who's name is written in katakana in it's Japanese pronunciation,below Tama... thank you Katie for helping me get that figured out...) I had a dream that my mom was walking alongside a white tiger... and shortly after that was when we had checked out and seen Tama for the first time in Hayate no Gotoku. And knowing the type of personality my mom had most of the time was a prettty humorous one, I thought the draw out for this tattoo was totally perfect!:D I know the pictures may not be the greatest quality because I did just get it done tonight, but at least you get the general idea of what it looks like. Let me know what you all think!:D I look forward to everyone's comments on this!:D 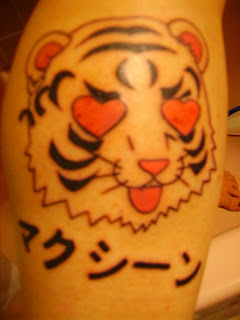 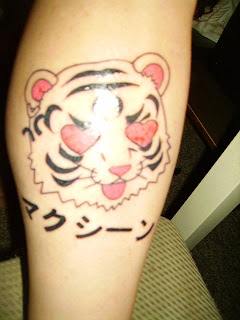 Cute looking tat, Now me being a guy I would never get this on me only because its embarrassing for a man to be sporting this (at least I think so). I mean I would get an anime character on me but people would laugh, and I rather not be laughed at lol...

Kawaii Tama tattoo! You've finally done it. Now you can be proud and show off your tattoo to anyone out there that you are an otaku!

@ bzou: many otakus would go to great lengths to to show that they are proud of what they are! so, it just depends on how you show it...and getting laughed at? it's common!

Awesome tattoo. ^^
I can see the love hearts in ur eyes when u finally got it. xD

Now go out there and show the world how much Tama loves u. ^^

Thank you all for your wonderful comments!:D
@bzou... I guess for guys sometimes this is more of an issue. Me, I don't mind being laughed at.:P TAMA ROCKS!:D:P
@justin... and this is exactly what I will be doing today while at work!:P I am actually really happy to finally get this tat done!:D And yes, I agree, it is common in this world for an otaku to be laughed at.:P
@optic... yes, the heart eyes were one of my fave additions to the tat, and that actually came at last minute in the drawing concept... what I did is took 2 screenshots and meshed them together, and then had my mom's name put below the picture. I don't know how many of you know that she passed away October 27,'07. She was one of my favorite people I ever knew, for many reasons. Well, that's enough for now, any questions on that matter feel free to ask.:D

The lines are clean and looks like there's no irritation, good show :3

All you need on the other arm is a neko-girl Hayate and you're good to go! XD

I'm sorry to hear about your mom, Riiana.

Condolences to you there.

Your tattoo looks really great! It is nice that it is in honor of your mother.