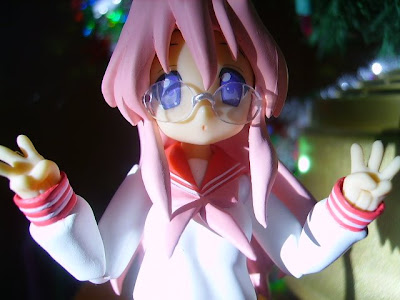 I got this Figma a few days ago but I didn't have any batteries for my camera. I pre-ordered her from Hobby Search a while back. She costs 2,261 Yen. The only reason it took this long for her to arrive is that she came with another Figma, I've been bundling each month's orders together lately to save a little on shipping costs. Finally the Lucky Star Figma collection is complete (unless they make more later on of course). Now that I have them all, I will be doing a group shoot of all four of the girls later on this month for sure. Why not just do them here? Well, I think having the whole group calls for a whole photo shoot, I enjoy doing them separately from the normal reviews. Konata did manage to sneak in a shot again though. If you're curious as to the other Figma that came with her, well you'll just have to wait and see. 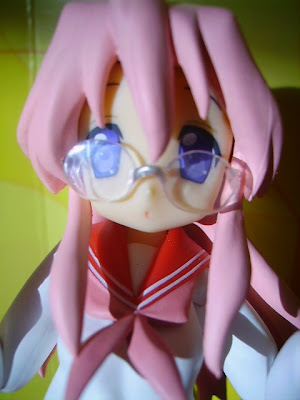 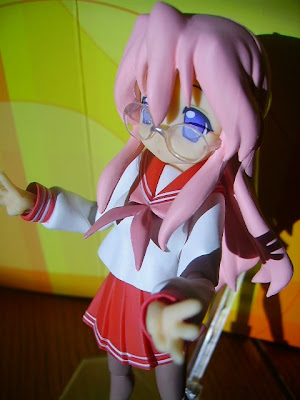 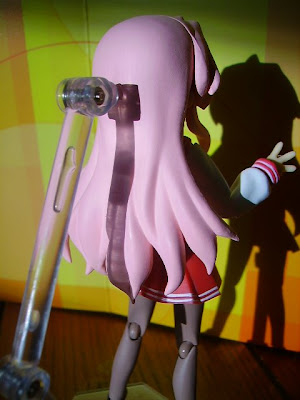 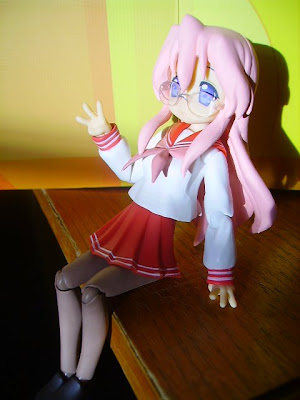 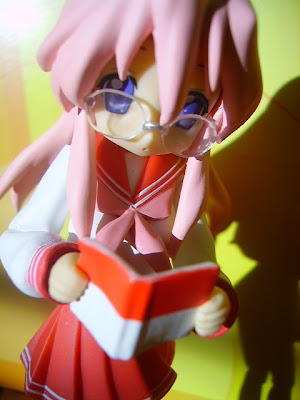 Miyuki comes with 10 hands, 2 faces, a book and removable back hair piece. There is a hole in her back and in her head (that the hair piece can cover up) for the stand. I prefer using the head for the stand so she's not looking downward. Now, this Figma is a little less flexible than others, in the head at least. She can't move her head left and right very easily, likely due to the bulkiness of her hair. Also there were some minor flaws in the paint this time around mostly in the front hair piece and one of the hands had some loose plastic attached. I'm not really complaining though, just stating the facts. It seems that even though she was released this late, she is of the same quality as the rest of the Lucky Star Figmas. Not quite top notch, but most fans won't care. I'm happy to have her and I've gotten over the little flaws even if I've come to expect slightly higher quality work lately. 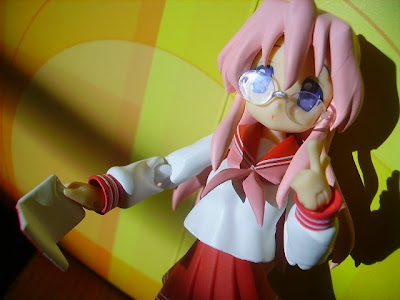 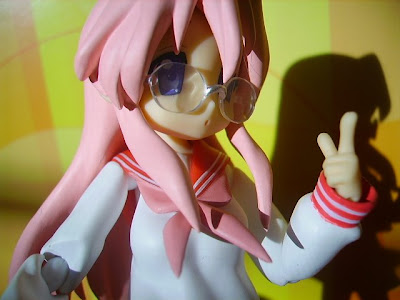 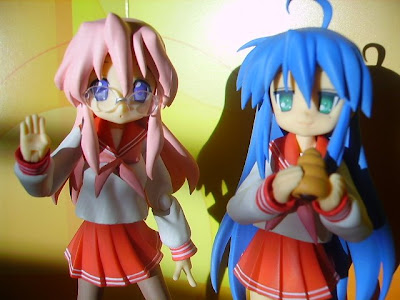 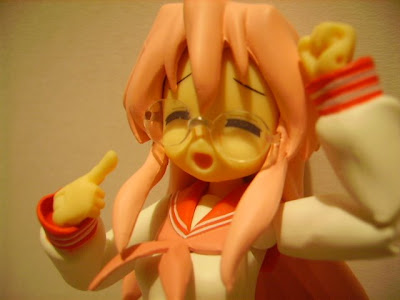 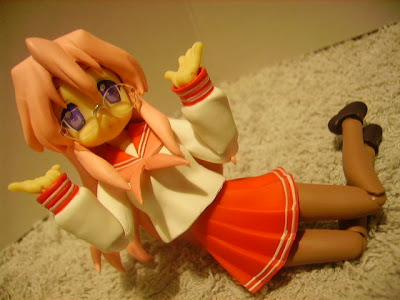 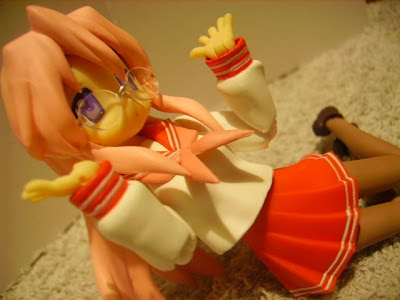 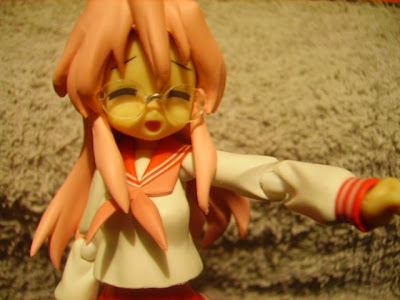 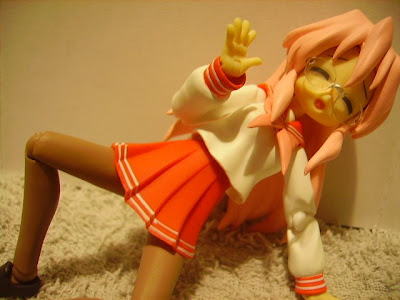 Something that I think is great about this figure is that she's taller than the rest of the Lucky Star group, and accurately so. Her figure is also dead-on accurate. Also, she comes with some kind of white stand thing, which I honestly don't know what it's for, but I'm sure someone else will or has reviewed her and revealed what it's for. The backdrop included is three panels long, and you see it in some of the pictures. It's from the one of the opening scenes to the anime. Last but not least her pantyhose/tights aren't just cut off at the pantsu, they're also coloring them, as you can see in the final picture. It is notable considering the majority of figures simply have plain white pantsu. Yes, more than some of you would like to know I'm sure, but come on now, we all look. 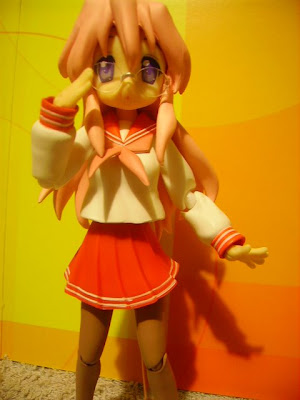 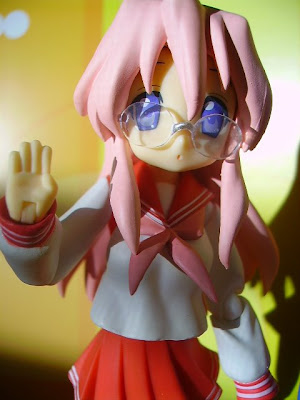 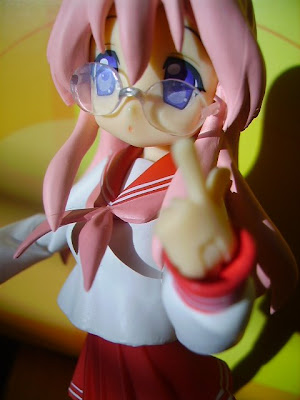 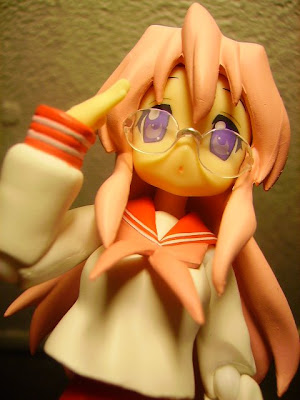 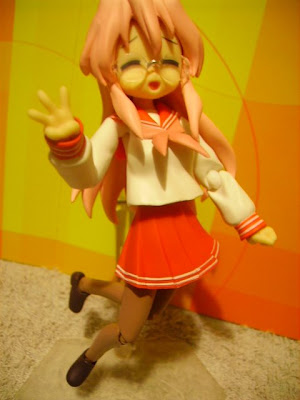 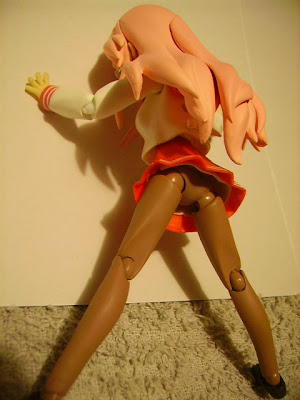 One thing I'd like to see with Figmas that have glasses is for the glasses to be removable. The glasses on all the Figma that have them so far are attached to the front hair piece. Now I'll leave you with the classic opening to Lucky Star!

seems like your miyuki's glasses has one side higher than the other side. same as me. initially i thought it's only me. >.<

Aww Miyuki she's sooo cute, I really want. I have Konata and Kagami on the way, can't wait til I get the chance to complete my Lucky star big four too.

Yea, the Miyuki glasses are a bit weirdly done. I have a friend that got her a few days ago. Doesn't really hurt the figure so it's all good :3

Miyuki looks like she is going to be least favorite of the set, although she is also my least favorite character of the girls so I'm probably biased based on that. Tsukasa is my favorite looking figma from the Lucky Star set so far :)

Oh noes! what's wrong with her pantie, I thought it would be white color.

my Miyuki is on her way ^.^ after i get her I'll have four of the girls~

Figma Saber seems to be my favorite still

Just remove the front hairpiece with her glasses on.

I wish they had done that for Miyuki.