It's already been nearly a week since I've posted here, and I apologize for the lack of posting. I didn't disappear to an MMORPG or get run over by a reindeer, not just yet at least (not that I'm planning to in the first place). Anyways, we're getting a bit behind on the posting and have a nice long backlog of posts to do. I've just been notified that Kyouka Miderizaki Nendoroid and Figma Hayate Yagami are being prepared for shipping. They'll be the first arrivals of 2009. Yes, this year is starting off slow. That's mostly because of Christmas, after all we have a son, and Christmas is for him more than us. I've been taken back down nostalgia lane playing old NES games with him. My first gaming system has become his first gaming system, only his is one of those newer ones with tons of games on it. There's only one figure so far this year that I don't know any information about that I absolutely must obtain. 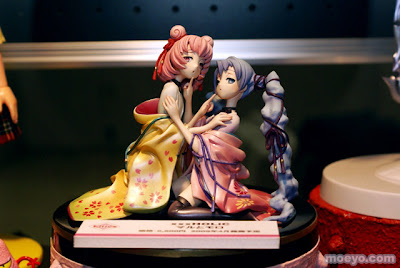 For those who don't know who these two girls are, they're Moro and Maru from xxxHolic, which I've been reading the manga of for a while now. Speaking of that I need to pick up the last few books yet. It's the first nice looking figure I've seen from the series that wasn't a gashapon. The only information I've managed to find so far is that it's made by Art Storm Co., Ltd as part of the Lilics Series, who were responsible for a rather bad Chi (from Chobits) figure, which right off the start makes me a bit worried. But, from the looks of this figure I can't see anything to complain about yet. The more recent figures look much improved over her though. If anyone who reads this happens to find out more about this figure before I do, I'd greatly appreciate it if you let me know. 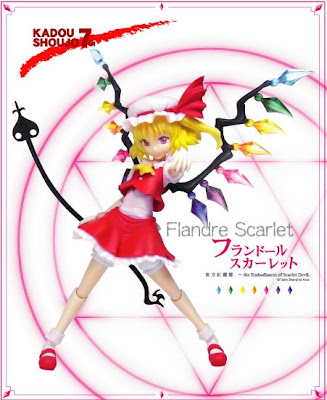 Here's another figure that I want, but this one may just be the untouchable figure of 2009. More untouchable than Figma Saber Lily, it's Liquidstone's Flandre Scarlet kit. In case you don't know who she is, she's a character from a series of bullet-hell games known as the Touhou Project. She's my favorite character, and when I saw a random picture from a festival sometime last year of her, I searched all over trying to find out more about this figure. Well, I found out who she's made by and I found the product page, but, she's not for sale just anywhere. Of course, I found more and more pictures and got excited for this to be announced somewhere. This figure is not what it looks like. She's an event only figure, nearly impossible to obtain outside of Japan without having to pay (from the way it looks) between $150-350, only available through online auctions in Japan, at least to someone like me. My chances of getting her are very, very slim. Also, she comes in a box in little pieces that you have to assemble. No painting is required, but you have to wet-transfer her eyes onto her faces. It's basically like a Figma you have to put together, but it's not. Well, enough talking about her. Click here if you want to see her product page with more pictures. 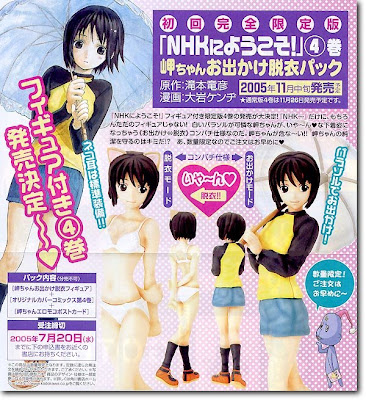 Last but definitely not least, Misaki Nakahara from Welcome to the N.H.K. This is an old figure, and another hard to find one. You can see her product page on Hobby Link Japan. I wish I had been reading the manga back in 2005. I've read the novel and watched the anime, but this is the only figure I've ever heard of related to them. It came with the fourth volume of the Welcome to the N.H.K. manga, and at a very decent price I think. I'm willing to drop some money on this figure though, so long as it's in near-mint condition. I've been searching for her for months, but I haven't found anywhere I could get her from, auction or otherwise. This is my figure goal for this year. Again, if you have any information regarding this figure's availability anywhere, or you yourself would be willing to sell her to me through some safe method, please let me know.
Posted by Persocom at 11:07 PM

Interesting - I never knew there was a Misaki figure! But hey, you think that's hard to find? There's a figurine I want of Kawana Misaki from ONE. Now, that's tough to find (for a decent price)! XD

Dam, at that price, I could get alter Hayate without a problem. ^_^

Start the year like this, it's only natural to slow down a bit.

Id be careful about buying ArtStorm figures.Ive recently got my Canal from ArtStorms Lilics series and the painting on the figure is one of the worst Ive ever seen.The shading is a total disaster.
The sad thing is that i was really thrilled about getting the figure and when i unboxed her ive got such a bad mood >.<

I have another ArtStorm figure on preorder and i pray that that one wont look that crappy.

Wow a castoff figure from a manga? That's new. I assume it'll be way overpriced on ebay ^^;

i really want that misaki figure

i might be able to help you. Will email you if i went the local figu shop. Thats where i got my misaki last 2 year back or so.

Oooo Maru and Moro are looking pretty.... I've always liked the yuri-aspect of those two lol.

And as for the head, put it on first. Next time I do anything like this, I'm putting the head on first..... even though the little guide-thing you get with the transfers show the head seperate from the body.... that was a 1/3 size head though.... Either way, head on first. I'm not sure what you do if you wanna change heads though.... lol....

Misaki is still around? I thought those were really hard to find, that it is not sold anymore!

Good luck on your purchases!

*changed blog to a different link. check out my nick above*

Definitely want these figures, especially Misaki, I hope we are able to get her somehow...

Optic - Slowing down ftw I guess, but tax returns is coming up, huhuhu

Blowfish - yeah I checked out your review, I'm very paranoid about the quality of Lilics, I don't think I've heard a good review of them.

LightningSabre - I'm sure it would be too, but I regularly check ebay to see if she's there with no luck.

pp - please do, I'd be happy to work something out with you if she is available there.

meimi - thanks I'll keep that in mind ^^

jusuchin - switching the link on my blogroll now.

Oh the pair of xxxHolic girls looks great. I have one ArtStorm figure, which is Iroha. It's okay as far as quality.

I want that Misaki figure, even if it is old and the quality not up to today's standards.

Sigh...I wanted an xxxHolic figure so bad..but I wanted one of Yuko. I mean they look great they really do (I hadn't seen them painted until your post), but my heart aches over how awesome a Yuko figure would be.

Who knows where to download XRumer 5.0 Palladium?
Help, please. All recommend this program to effectively advertise on the Internet, this is the best program!