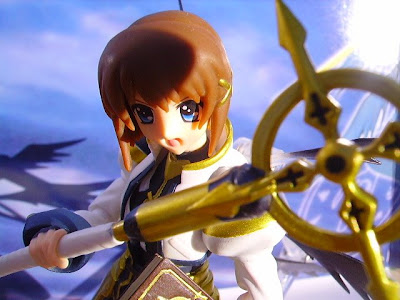 Introducing the Figma version of Hayate Yagami, from Magical Girl Lyrical Nanoha StrikerS, the third in the Magical Girl Lyrical Nanoha series. With this, the current Nanoha StrikerS Figma collection is complete, so soon I'll be doing a post with the other two girls, Nanoha Takamachi and Fate T. Harlaown along with Hayate. I bought her from Hobby Search for 2,533 Yen, not including shipping of course, as I combined her with another figure. She's still available at the time of writing this review, so if you think she's a figure you'd enjoy don't miss out! 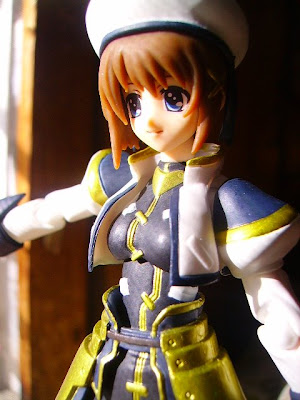 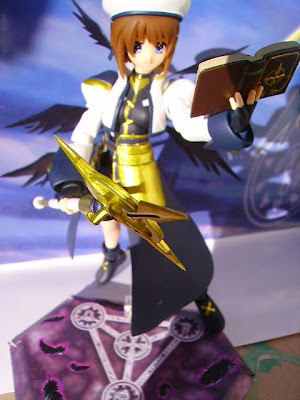 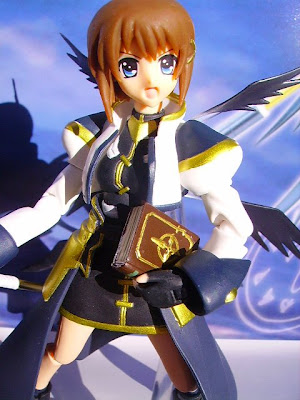 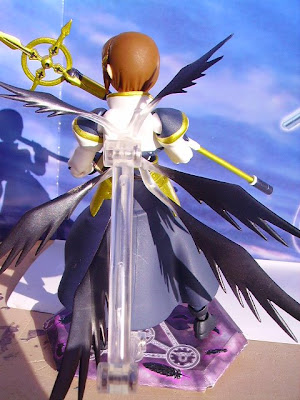 Hayate Yagami comes with 2 faces, 2 hair pieces (one normal and one with a slot for her hat to fit on and keep it in place), her hat, 2 versions of the Book of Darkness (one open, one closed), and 10 different hands. Also, you can't forget her intelligent weapon the Schwertkruez, which the top and bottom come off so as to slide into her hands for holding. I admit it's a bit of work to get it into her hands but I'm sure after a while it'll be easier to do. Also, last but not least she comes with a set of 6 wings (all attached to eachother) which are made of a see through black and clear plastic. WARNING: Hayate's wings are VERY fragile. Trust me... I broke them within mere minutes of opening her box, and I'm usually very careful with my Figmas, I just happened to be distracted for a moment and that's all I needed. You can't notice it though because I did a good super glue fix up. It's not really a huge deal, but I did get a bit upset at first. The wings also come with a peg in them that's removable so you can either have her wings on her back without the stand, or put the wings on the stand itself along with her. Her coat bottom (the skirt part) is removable as you'll see in some of the pictures, and quite easily so, you just have to seperate her body, which I don't really like doing because I'm afraid the joints will become loose that way. I think that's about all I have to say the review part of this post. 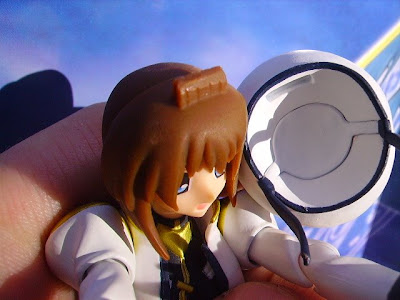 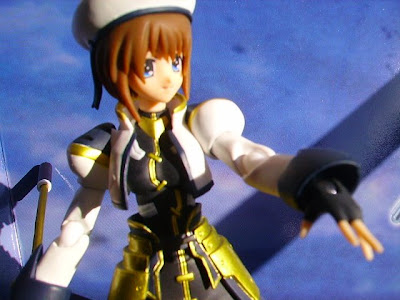 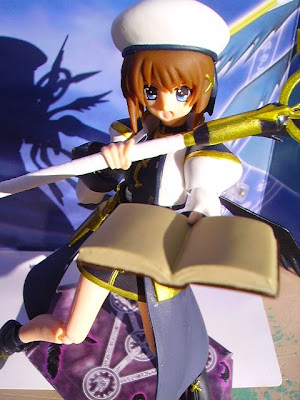 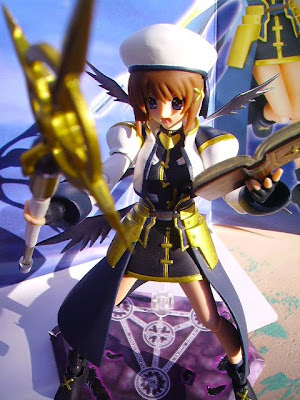 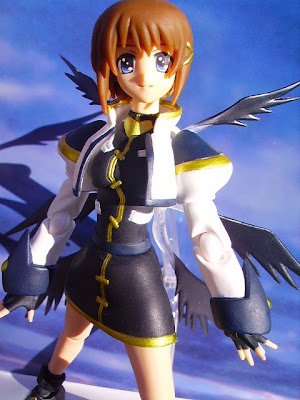 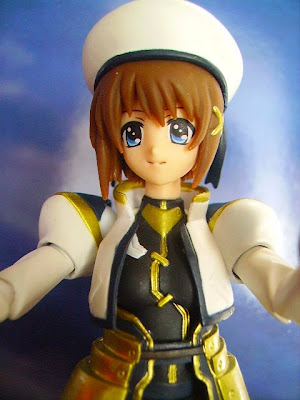 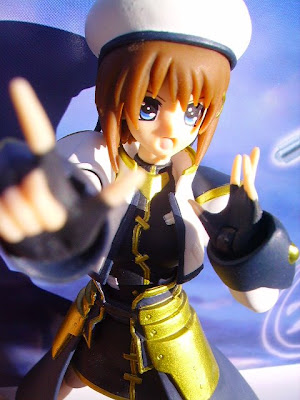 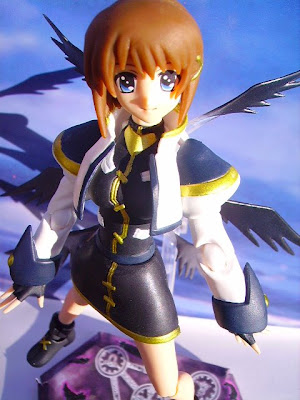 If you're wondering about the base of her stand, that's a custom cover, not made by me. I printed it off at the local print shop (note to self: buy a new printer), and I got it from here. There's a bunch of other ones for Figmas available on that link so check it out if you are interested. Also, I'd like to mention fellow blogger Acesan has a great Figma Hayate Yagami review over at his site, so do check it out if you're thinking about getting this figure. 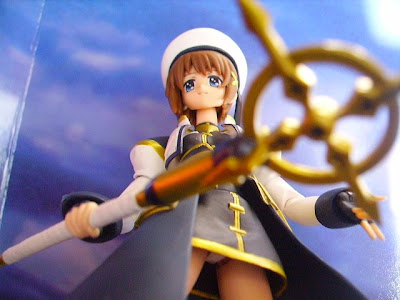 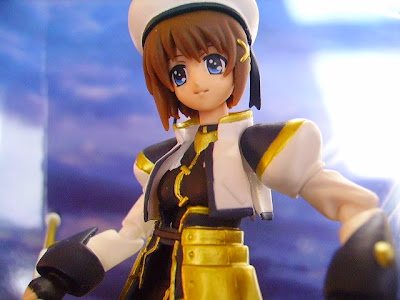 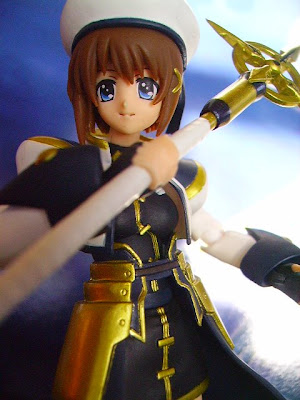 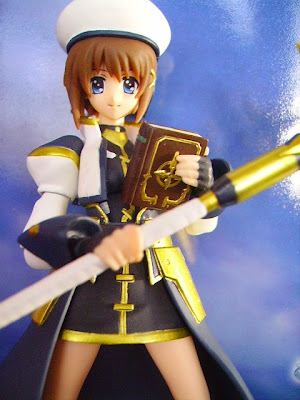 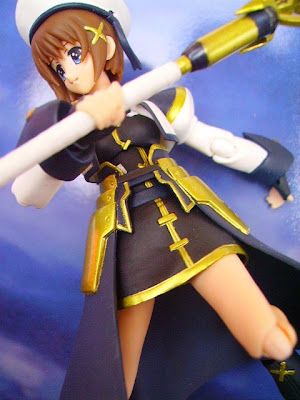 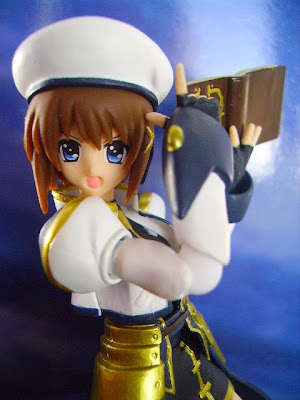 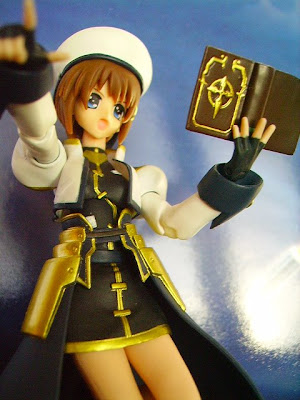 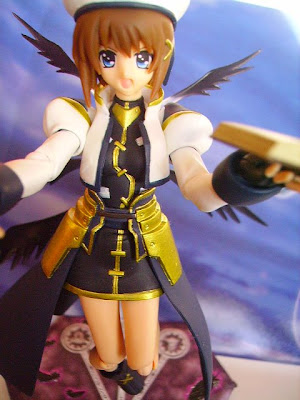 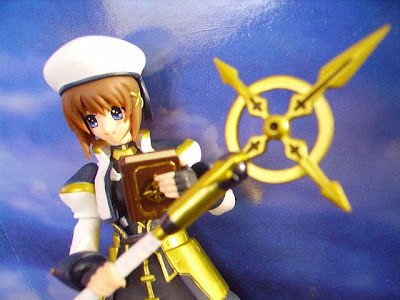 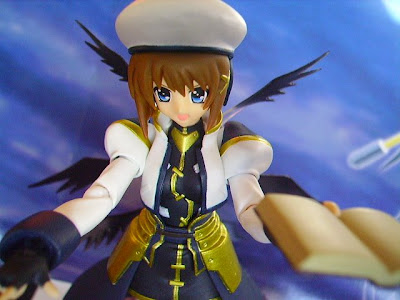 nuuuuuuuuuuuuuuu!!! you guys shipments arrive early.
mine still in transit... cant wait for mine. good review. Like the custom magic-circle base

Somehow, KKnM isn't taking orders for this. Wonder why... I got the rest though D:

OOoh mine just arrived today =D I shall open it later or tomorrow xD Thanks for the info about the wings, will be more careful with mine :D

It's cool how you shot this under bright lighting! Makes her look very royal.

How I wished I had those D:.

I really thought Max has already jumped on the custom base bandwagon. I had to check HS product shoots to see if it was true. lol

Thanks for the tip on her wings. I had enough of figma dilemmas and I don't want this one to be the next. @_@

I'm just waiting for it to hopefully arrive here.

Love Hayate Yagami and I can't wait to buy her!

Yep, I could already tell those wings would be easily breakable as soon as I saw my ones.

The stand cover looks really cool. I wish I had a good printer as well, but wasn't really a priority!

Nice review, and can't wait to see the one with Nanoha and Fate you're going to do!

Even though I'm not getting one, Hayate looks pretty nice just like the other Nanoha girls. The wings do seem a little fragile though, but glad to know that you've fixed it.

On a side note, are you using natural sunlight for the shots?

ejump - probably cuz I do EMS shipping through Hobby Search, but it all comes down to how long customs decides to screw around with my packages. sometimes it goes through customs in 2 minutes, sometimes it sits there for 2 days.

Rin - the base is nice, I've got one for all three of the nanoha girls now.

konadora - that sucks, maybe you should email them and see why they aren't

kazearashi - np, I was trying, but I failed XD

Netto - the figure or the bases?

Optic - it's an illusion :P yes no more figure dilemmas

blood on the mirror - thanks ^^ I love Hayate as well, most underrated Nanoha character I think

Q - yup natural sunlight for all the shots.