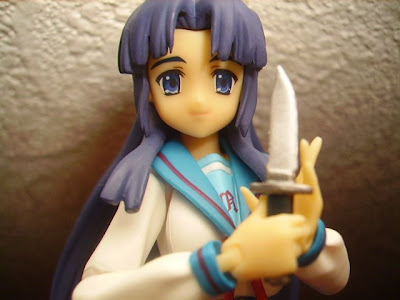 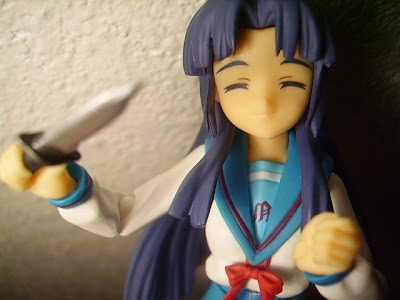 Ryoko Asakura is a character from The Melancholy of Haruhi Suzumiya, and this lovely Figma arrived about a week ago now. I just hadn't gotten around to taking pictures and reviewing, but she's been gracing my shelves (as you may have noticed in my last post). I got her from Hobby Search as usual, and she cost 2,261 Yen, not including shipping. She's still in stock as of the time I'm posting this, so if you like you can buy her here. 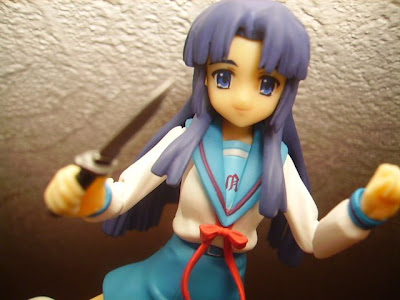 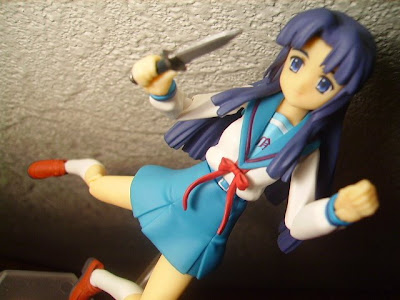 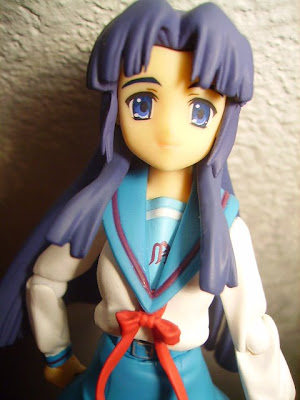 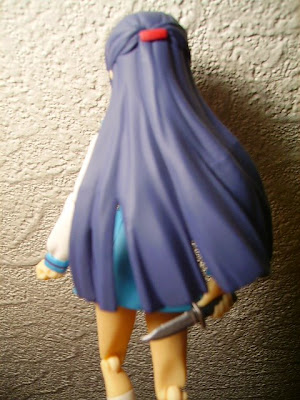 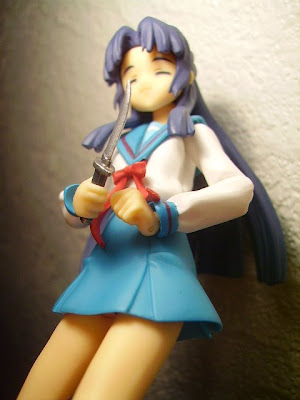 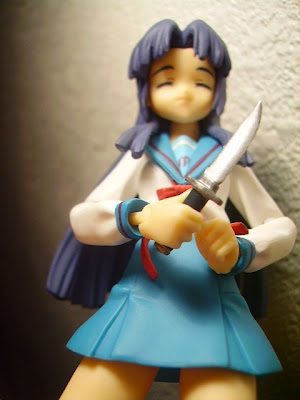 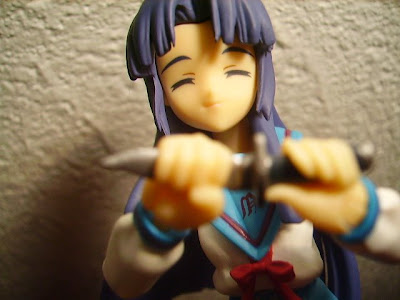 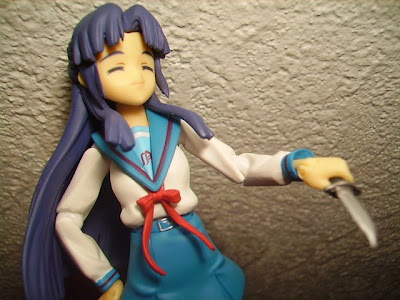 I'm pleased to say that I found no flaws in this figure. She came with 11 hands, 2 faces, one head of Taniguchi (a male character from the same series), and one knife. The knife itself could have been done better, only because the blade is a bit too flexible. I'm sure there's a good reason for that though. Ryoko took a little longer than most of my packages, US Customs held her for three days. Something told me a girl with a simple knife like this would get held longer in customs, they probably had to check her for real weapons *roll eyes* Since I don't have any male figures from the Haruhi series, I just decided to use his head in ways that were befitting of a knife wielding psycho woman. 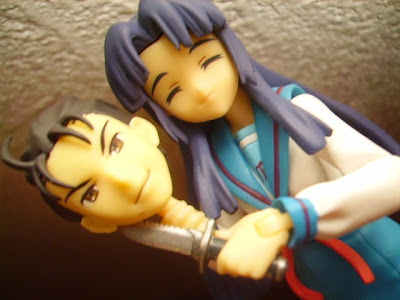 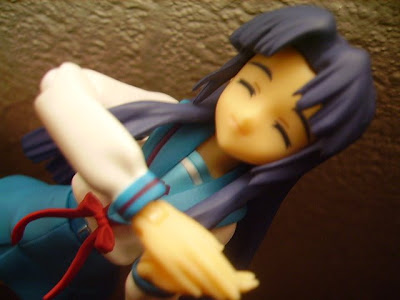 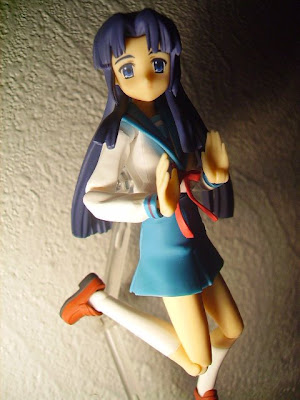 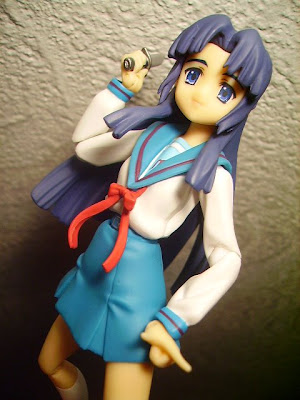 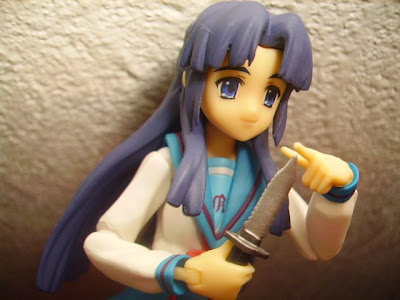 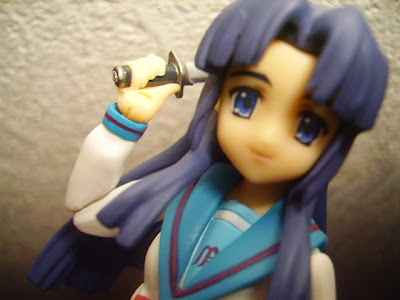 I like how aside from the two knife wielding hands there's another extra hand included to hold the knife blade itself. This is no doubt to recreate the fight scene between Ryoko and Yuki Nagato. I was going to attempt that myself but I figured I should wait until I get Kyon too. Yeah, I'll probably end up getting him but not for a while yet. Sorry, no Taniguchi in one piece pictures from me. Anyways, Ryoko is another Figma that I suggest fans of Haruhi, blue hair girls, or crazy women with knives pick up. Until next time! 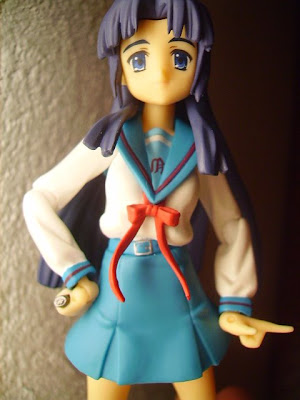 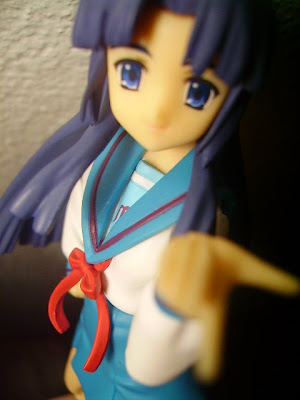 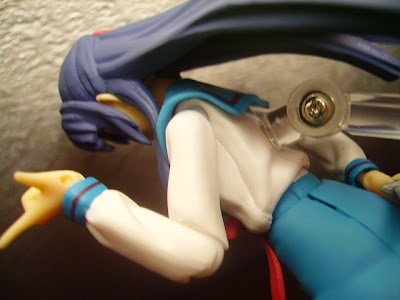 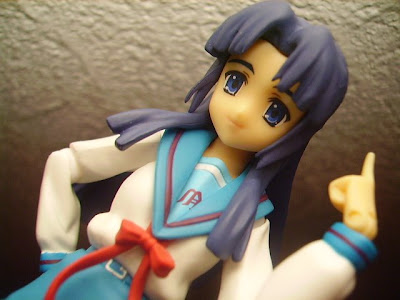 And here's a little accompanying video.

I totally forgot that figma was made, I may get her someday.

Got her too - and I totally wasn't expecting the knife :P

Haha, that pic of a smiling Ryoko with Taniguchi head is hilarious. Thats pretty evil of you. =.="

Ryoko is really scary , she may look cute but beware of her knife :p

Ryoko can be sexy and scary at the same time...
I just love her figma...I just don't understand Taniguchi's head with this...

Rin - I don't either, you'd think a male head would go better with a male figma, but it could just be a marketing plan to get people to buy the male haruhi figures that seem to have sold less *shrug*

Lolols, you should do a pic of Tanigushi on her body..

Hehe if someone had told me there was a knife with that figma I would have got it long ago.

I was hoping it would come with it...as it's her famous accessory.

By any chance did custom open the figure box to check the knife? lol
I didn't get her in HK as I knew I had her on pre-order. She arrived a few days ago before I got back which I was pleasing. ^^

I love this post!:D That video was really good too!:D
And yes, Taniguchi's head does come in handy for pics like this!:P

Hahahaha you did some really good poses with her. If I ever get her I just may have to copy a few of the poses you chose when I display her

try stabbing another figma with the figma lol

Hey... stumbled across your blog~! And I have to say, I'm kind of hooked, scrolling through each entry.

Anyways, I came across this post, and saw that you got Asakura figma. I was wondering, since you don't have any of the male figmas, if you were interested in selling Taniguchi's head. Please let me know if you are interested at all ^__^

In the meantime, I'll continue looking through your posts~