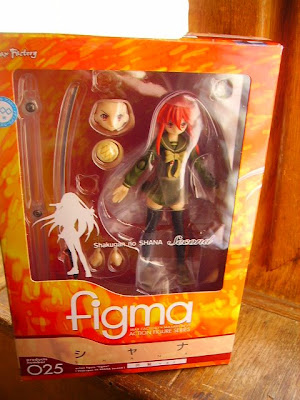 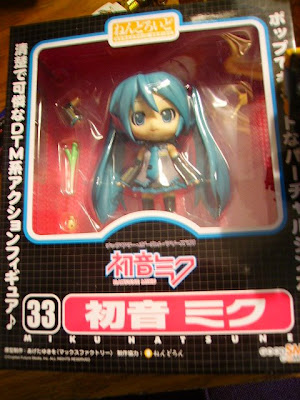 Well, it's 2009 already in most of the world, but I'm still stuck in the past. I got lucky and these two figures arrived this morning, just in time to be my last arrivals for the year. This ends my first year as a figure collector, and I'm ending the year happy. Figma Shana and Nendoroid Miku Hatsune have made themselves snug and warm in my cold living chambers. Maybe Shana can warm the place up a bit. Nendoroid Miku marks my very first Nendo! I have one coming in January and another in February. Well, I'm not really going to be doing anything special to bring in the new year as far as I know, maybe watch anime or something. I don't drink or "party", been over that stage for a while now. I am NOT going to add up my figure expenses or whatever for the year, I don't even want to know so I definitely don't feel like sharing it with others. Anyways, I really don't like making new years' resolutions, but I think instead I'll just list a few goals that I should be able to accomplish. So here goes. 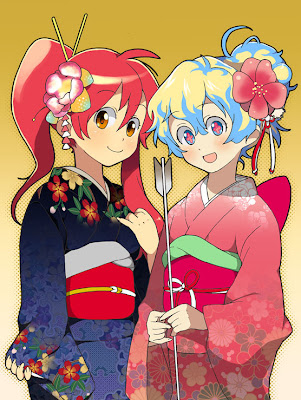 To stop procrastinating and actually TRY to learn Japanese, by learn I mean to read, write and speak it fluently. I don't have to master the language, but I want to do the best I can instead of slacking off. I need to buckle down and study seriously.

To get myself in better physical shape. That means more frequent exercise, but not too much, too fast because I'm way out of shape.

To shed some of my hikkikomori ways. You might wonder how one can be a hikkikomori and be married and have a son, but believe me it is possible. I've lived here for over a year now and I haven't been around much, or met many people. More outings, more often. I might not seem to have a problem, but that's only because I don't talk about it much.

To cosplay for the first time, and go to my first convention. Yes, I, as an anime fan, have failed to attend even the smallest gathering, largely in part to the above factor. Why would a hikkikomori go somewhere where there's lots of people? Anyways, I'm going to make it a goal to drag my butt to Nan Desu Kan in September, I'll be posting more about that one of these days. I also have a few different ideas for cosplaying now.

To spend my online time more efficiently. Get more done in less time, and spend less time vegging out in front of games. I've already been doing this but I want to do it more. That means no more MMORPGs or at least, a hell of a lot less. Really this isn't a problem right now, but if I find another game who knows how much time it will eat up, and/or money. This goal also means being a better blogger. 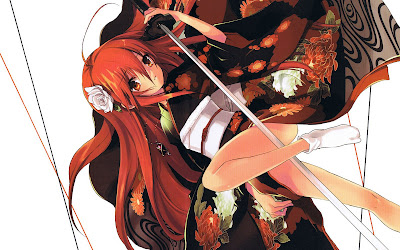 Alrighty, that's probably enough on the goals. We might be moving the blog to Wordpress sometime in 2009. We've been messing with it for a while now, and we've been considering the move. The only thing holding us back right now is money, because we'd like to have a host. For now, we'll be sticking with blogger until the time is right. We have a nice list of future posts to work on, so January looks like it'll be pretty busy here on Animaticfigmation. So to all our readers, have a safe and happy new year! May 2009 bring us closer to ourselves and make the world a better place.

Non figure images from Gelbooru.
Posted by Persocom at 3:07 PM

My resolution for this year is also to learn japanese. Happy new year!!

I stopped making any resolution because I know I won't achieve them. -_-
Congratz on ur first nendo. What better way than to start it off with a Miku. ^^

Happy New Year! I hope you will reach your goals for 2009.

I find it strange that you consider yourself a hikkikomori when you are married and have a child. Actually if anything I thought you wouldn't have much time to do a lot of things when you have a child. Guess I'll find out later in my life.

For cosplaying, you should try to get the family involved. I've seen parents cosplay with their kids at conventions and it turns out really well. You all end up having fun and doing something family wise.

Happy new year dude & family.
The sun already up over here, so time to move on into the 2009

good luck on your goals.

it's interesting cos according to studies most people will put "stay in shape, hit the gym, eat less" etc as new year resolution as well. ^^;

Happy New Year to you ^^. Good luck on your New Year Resolutions. Sweet Nendo xD. I just mentioned her in my newest post ^^;;;.

Yup, getting in better shape is a fantastic goal. Good luck with learning Japanese, too!

Happy New Year, Persocom and Riiana. Good luck to your resolutions. If you need any help regarding exercise and techniques you can ask me for it, since I do go regularly.

Happy Nu Year to you and your family! Hope you all have a good 2009 :D

hope u can achieve your resolution

Happy New Year to you too! Congrats on getting figma Shana and Nendo Miku, and good luck on the resolutions (I don't like making resolutions too)!

Impressive new years resolutions; best of luck with them!

And yes, you really should go to anime cons; they're tons of fun!

Happy New Year/bonne année ! Good luck with your resolutions. I also hope to know enough Japanese someday to read blogs and whatnot. I'm glad to see you got your nendo Miku! And I hope you'll attend a great con, I have some hikkikomori issues myself but conventions have almost always been great experiences. :)

At one time I resolved to learn Japanese and I was going well until I hit the Kanji, got discouraged and gave up ^-^

On the plus side, I can half-understand raw anime nowadays!

Anyway keep up with the blogging, your site is one of the few i religiously follow. And don't knock yourself, you're doing better than me, you're married ^_^. And have an SO who is also into Anime!!!

Thank you everyone ^^ Without you all 2008 wouldn't have been as awesome as it was! You are all give me another reason to blog, and I look forward to all your future blog posts!

Regarding me being a hikkikomori, well, I wasn't one until Riiana became pregnant, call it worrying too much, along with hanging out with the wrong people, and moving to a new place where I don't know anyone.

Anyways, thank you all for your wishes and I look forward to another year with you all!

I'm still debating if I should buy that Shana Foigma or not...I'm really torn between how much space and money I have versus how badly I want her...I mean sure she is only like $25 but pre-ordering too many figmas adds up fast hhhmmmm