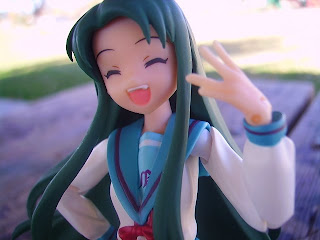 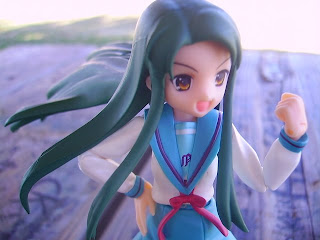 Nyoro~n! Yesterday Tsuruya-san came for a permanent visit to my collection. She's a minor, but still popular character in the The Melancholy of Haruhi Suzumiya. I'm pretty sure almost everyone knows that already but there are some who might not. Well, I tried to shoot her yesterday at the nearest park but I was rushed for time so I didn't get very many pictures. Something about Halloween drawing near and the leaves turning color made me want to take the pictures outside, but I really couldn't get what I was going for. My neighborhood isn't very otaku friendly, or friendly in general really. So nothing spectacular in the way of creativity here, sorry. I might try to do something interesting for a Halloween post though. 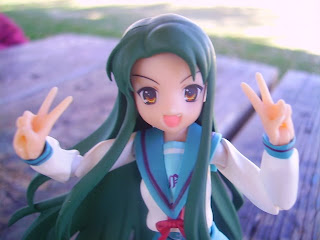 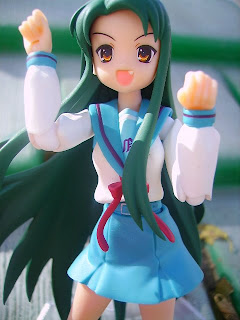 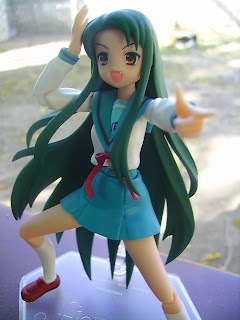 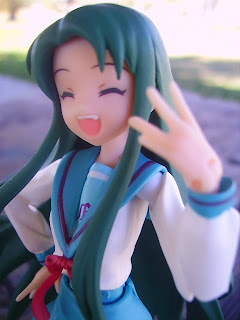 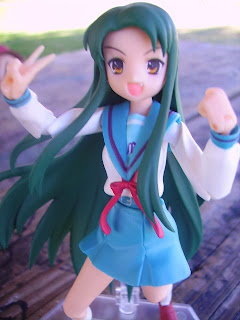 Her hair is unique to all the other figma, because it's actually jointed in the back, allowing her (heavy I might add) hair to lift up so you can reach the hole in her back with the stand. There's also a hair piece like Konata's that can be taken out to reveal a hole for the stand to go in her hair. I actually prefer the hair one myself, because of how heavy her hair is, but it's nice to have options. I wish Konata would have been like that also. It looks like Max Factory are getting the hang of making figmas now, she's very well made. Her hands are easier to take out and put in, and since the joints in them are made of ABS as opposed to previous figma, I'm not so worried about snapping them. We'll see in time if it really does help though. 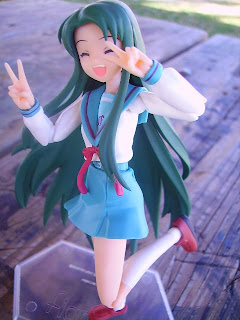 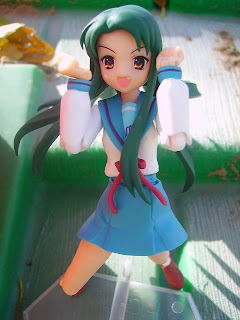 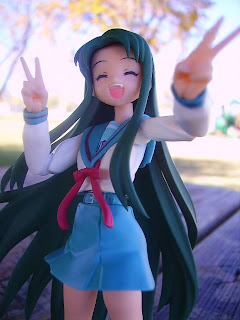 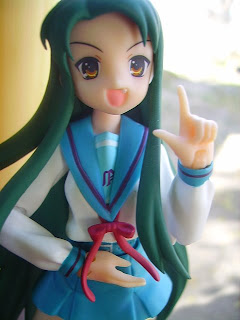 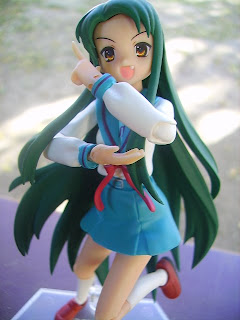 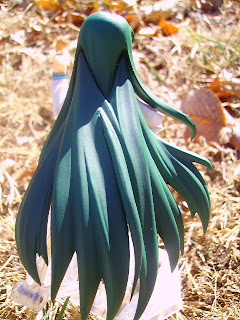 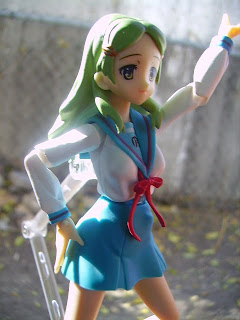 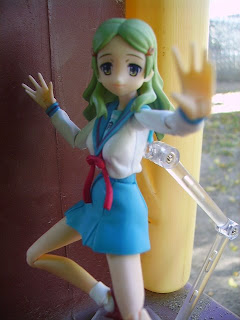 She's got two faces and 10 hands, the normal Haruhi figma hands and two V sign hands, which you see plenty of here. I especially like her fang. I do wish she played a bigger role in the anime, but I guess there's nothing to be done. I also wish they would have figmatised her in maid cosplay form instead of the same old school uniform. I love these figures but that uniform is starting to dominate my collection. Ah yes, and she comes with an even more minor character's head, Emiri Kimidori. I didn't go out and buy a second of any of the Haruhi figmas to compensate for her head either, money is a bit tight these days and I can't justify buying two of anything but limited and hard to acquire figures. So I just used Mikuru's body here. 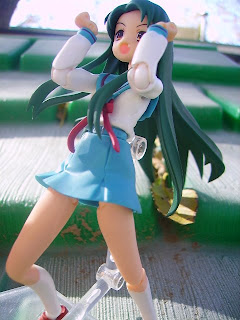 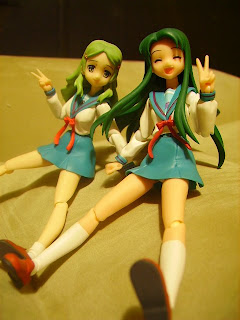 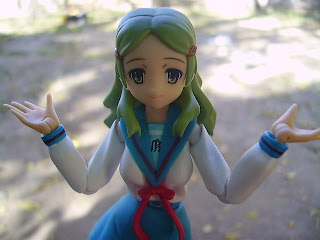 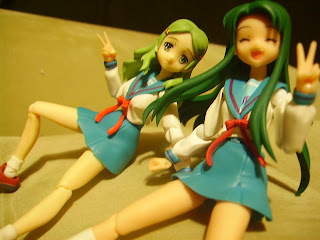 Click on the pictures to make them full size, and check out my flickr for more!
Posted by Persocom at 1:55 PM

It's a weird figure. Why not release Tsuruya as one figure...
Anyways, nice outdoor shoot!!!
Great job on the shoots!!!

the happy face looks good. at least we see teeth. most of the other figmas' open mouth smiling face shows no teeth.

I love her catfang^^
Shes the girl i like most from the Haruhi series.Im not a fan of the series but she got my heart :D

i love the faces she comes with ^_^

Wow, having Emiri and Tsuruya at the same time does look cool.. Although it is a bit weird to have Emiri's head only..

They should have made a separate set I think.. ^^

Nice shots ^_^. I kinda wish I had mine now, but recently cancelled, and re-ordered her at HS so I could combine shipment with a bunch of other figures I've been wanting.

Yo dude, I have no idea what your email is so I am leaving an off-topic comment. Do check out our November Updates post in the Team Blue blog and leave your feedback where you can, thanks!

nice review there ^^ soon you'll have a classroom of em ^^;

Though Tsuruya is pretty popular, I think not many people are willing to spend money for her. :\

I know I had to cancel my Tsuruya Figma pre-order but I still say Max Factory did the best job on her (ofrom the Haruhi set). Her smiling face is so darn cute! But don't worry I'm too mournful, I'm still pretty happy to have the whole main cast of Haruhi.