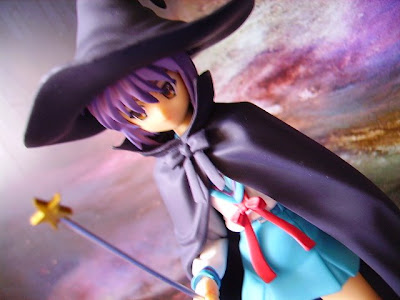 I got Yuki Nagato Evil Witch Ver. Figma a couple days ago now, but I just didn't find time to write up a review until now. Just in case there's someone who doesn't know who she is, she's from The Melancholy of Haruhi Suzumiya. I ordered her from my trusted favorite store, Hobby Search. Alright, now since that's out of the way it's time to talk about her. 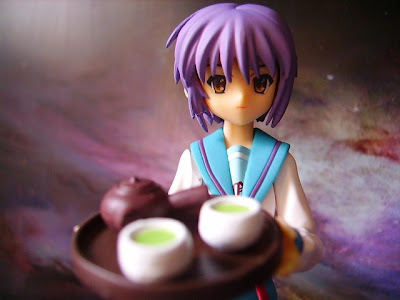 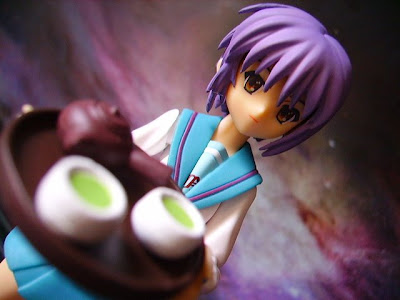 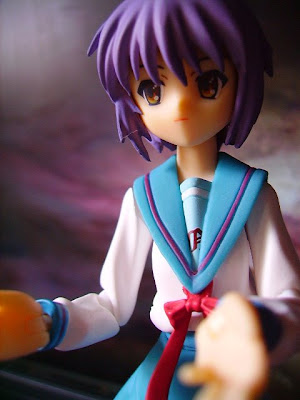 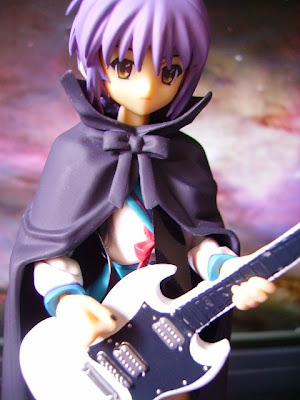 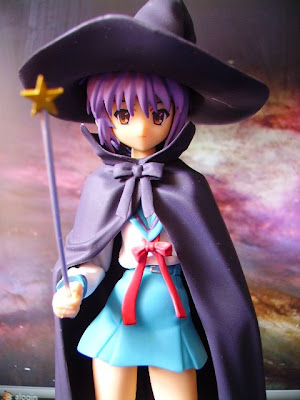 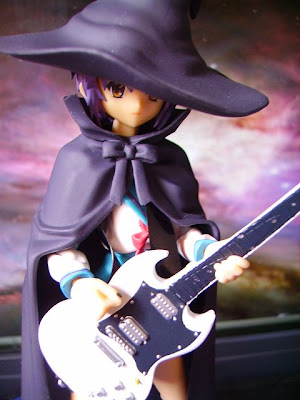 First off, this version of Yuki comes with a load of extras. You have 14 hands in total. 2 magic wands, 1 guitar with strap, 1 cat, 2 tea cups, 1 tea pot, 1 cat, the mage hat and cloak, a sign with 4 stickers (2 different ones, with two each of them), and an extra cloak piece. Alright now to break it all down. The cloak is made of hard plastic, so it's not like the skirts and other parts of figmas that are usually flexible. The cloak also comes apart, it's in two separate pieces, as you can see in the pictures. One piece allows for somewhat of free movement of only one arm, the other covers one arm, and the third piece allows for somewhat of free movement in the other arm. I'll tell you now, the cloak is a pain in the ass. There is a hole in the back of the cloak, but the cloak snaps in two pieces, this hole is where the stand goes through and into Yuki's back. Trying to align the hole can be a problem. Trying to get her head on her after putting the cloak on can be a problem. It's just a slight annoyance though, nothing that I haven't already gotten over. It was a bit frustrating at first. Her hat doesn't really snap in place but I don't have problems with it falling off too much. It's got a groove in it sort of to help it rest in place, it's just not very secure. The guitar is cool, although it doesn't have strings on it, which some people might not like. It makes sense not to have them on it though. The magic wand is thin and looks easily breakable, which I assume is why you get an extra one. It has it's own special hand to hold the wand with. Not too much to say about the tea set and cat, aside from the cat's tail doesn't move. I like how she's in the school uniform without her cardigan on. With all the extras she's really fun, you just gotta get used to the cloak. I prefer her with it though and she looks great with my other figmas. I hope they release Haruhi in her bunny outfit to go with this one, and maybe a maid Mikuru, but I'm not so sure they'll do it with all the Haruhi figmas that they've already made. Keep your fingers crossed or whatever it is you do if you're a Haruhi fan, it's still quite possible. Anyways, overall she was a bit harder to work with than other figma, but she is so loaded with extras that she's worth it. She's especially worth getting if you're a fan of Yuki Nagato herself. I, myself, am definitely a fan. This will be the second Yuki figure I own now, along with the original (and very first ever if I'm correct) Figma. 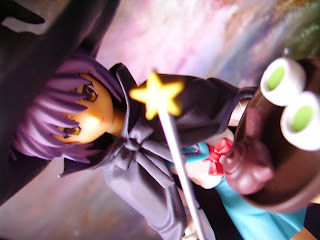 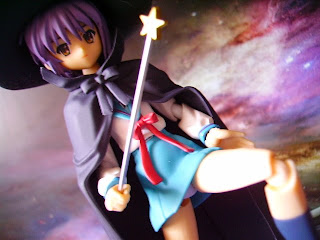 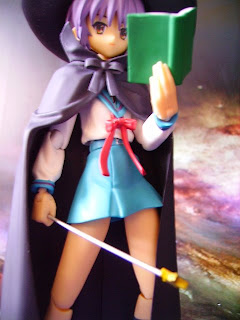 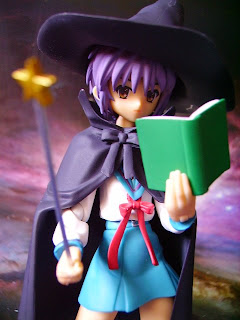 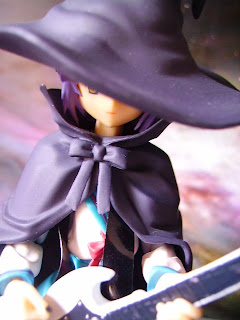 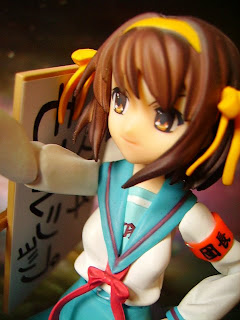 Book not included with this version of Yuki, it came with the original. Haruhi also not included. I had originally only intended on doing a normal review but I felt like playing a little. For anyone who might be reading my blog regularly, what would you like to see more of? Do you like my surprise appearances? I'm still pretty new to blogging so I'd like your opinions. When I do my little review things, would you like more pictures or more information? Just looking for a little feedback so I can take note for future posts. Hope you enjoy! 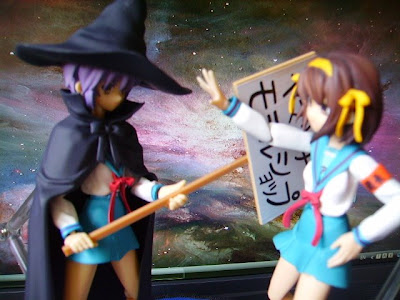 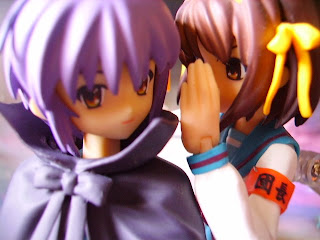 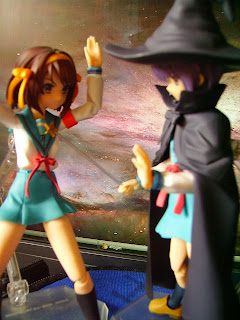 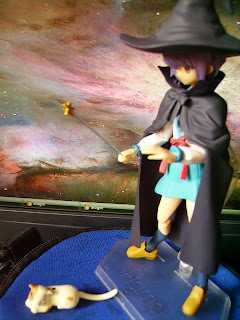 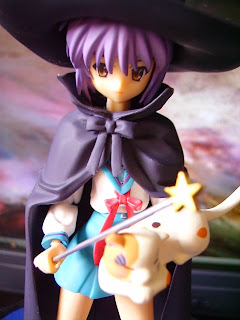 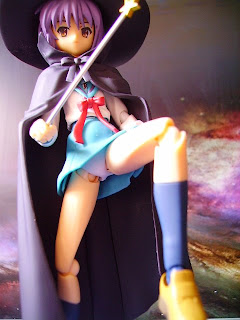 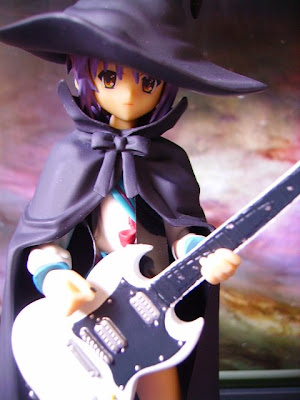 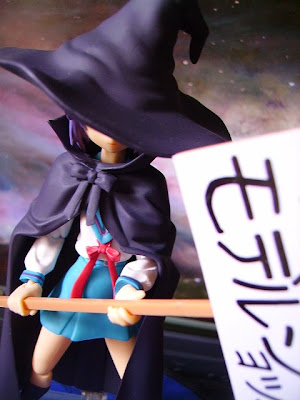 Mine haven't arrive yet I believe =_="

Got to wait a while more before I can pick it up.

She looks awesome. I love seeing Yuki with her guitar. As for site stuff I an not at liberty to say much. I love to see your reviews and think you do a great job with them. There are plenty of pictures showing off all the details. I think everything is perfect to be honest. ^^
Sorry for not commenting lately, but I will have to start again.

Since I already have the regular Yuki figma I resisted on this one. I want to try and control myself and not buy duplicates of figma characters (minus Saber).

she looks good and its is nice that her comes with the cat, guitar and tea set

nice pictures and documentation ^O^! thanks for sharing it with us!

I want a figma body with the cardigan, but I want Bad Witch's accessories!

Your reviews are good the way they are. They're informative, and still fun. "Surprise appearances" are fine, but just make sure the focus is still on the figure you're reviewing.